Atop a mountain, a smile radiates peace

Ta Cu Mountain, Vietnam -- The Ta Cu Mountain is imposing as it rises out of a 25,000-hectare primary forest, but the spectacular view, fresh sea breeze and beatific smile of the dying Buddha sets the stage for an inward journey. 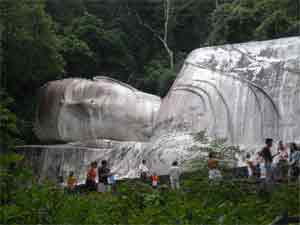 The panorama of the city spread out below us as the cable car took us up. A meandering river ran past vast paddy fields, red-roofed houses and green trees. The scenery of the city was hidden from view as the cab got higher. We were surrounded then by high and low hills covered with various kinds of trees and plants standing so close, they seemed to be joined to each other. In the far distance mountain ranges emerged hazily from the sea. When we got nearer to the top, we could see almost nothing as white clouds obstructed our view.

We got out of the cable care and began to walk through the forest, and then climbed over a hundred steps to get to the ancient temple built by a Buddhist monk named Tran Huu Duc in 1872. The temple is now under reconstruction. Climbing further, we reached the site where a set of three seven-meter statues of the Buddha and Bodhisattvas of the Mahayana-tradition stood in eternal meditation.

In the middle was Amitabha, the Buddha of the Pure Land, flanked by Bodhisattvas Avalokitesvara on his right and Mahasthamaprapta on his left. As we rested awhile, the songs of birds resounding from the vast green forest behind the statues augmented the tranquil ambience.

Even further up, on the top of the mountain, lay the 49-meter long, 10-meter high statue of Sakyamuni Buddha created by sculptor Truong Dinh Y in 1962. No construction machinery or equipment had been used to build the statue. It was a true labor of love. The statue is of the dying Buddha, reclining on his right side. The compassionate and peaceful smile on the exalted face touches Buddhists and non-Buddhists alike.

Many people tried to climb up to sit or stand on the feet of the Buddha statue to take photos. No matter what they did, however, a silent smile always appeared on the Buddha’s delusion-free countenance.

As we soaked in the scenic beauty and fresh sea breeze, from far below, the temple sent up the melodiously vibrating echoes of the ringing bell to soothe away all our daily problems and tensions. At that moment, we seemed to forget all our regrets about the past as well as worries about the future, and stand as one with nature. It was easier then to reflect and realize that true happiness was simply the inner peace within our self in the present moment.

We climbed down the mountain, trying to retain images of the captivating scenery on both sides in our mind. At the foot of the mountain was a banana forest producing very long bunches of the fruit. The flesh of bananas in Ta Cu is especially sweet, my traveling companions decided. It seemed a fitting way to end the trip, savoring the fruit of a fertile soil that had given us food for reflection and introspection.

Located in Ham Thuan Nam District of Binh Thuan Province, about 28 kilometers southwest of Phan Thiet City and 167 kilometers north of HCMC, the Ta Cu Mountain stands 474 meters above sea level. The Ta Cu or Linh Son Truong Tho Temple is perched at the height of 400 meters. A two-way journey by cable car costs VND55,000 per adult.