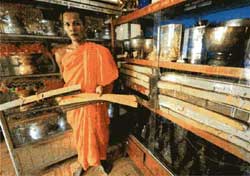 The original pagoda was built about three centuries a got on a wild area of dense bushes and little human settlement, according to head monk Chau Soc Pholly, who is the sixth generation of monks at the pagoda. He added that centuries ago the area was the kingdom of monkeys, so when Khmer people chose to build their pagoda there they named it Xvayton, Xa Ton in the Khmer language meaning "monkeys pulling each other by their tails",

In 1896, the pagoda was supported with concrete and made more secure with unique architectural styles that have lasted until today. The head monk told the Daily that the pagoda was built with the cooperation of 50 monks and many well-known architects working all day and night.

The Khmer people hold many traditional festivals at the pagoda, namely the Chol Chnam Thmay in March, Sene Dolta in August and in October the Ocbomboc Festival, the bumper crop blessing festival. During these events the monks in the pagoda often preach the old stories, proverbs and sayings in those leaf prayer books to the people.

Chau Soc Pholly said that the oldest of the leaf prayer books stored in the pagoda is over one hundred years old, while the newest one was recorded in 1963 by superior Buddhist monk Chaoty. The leaf used for those prayer books was Tra leaf, a tree that resembles, and may have the same origin as palm trees that are rare in the region now.

The leaf prayer books recorded ancient stories and legends about the Khmer people, the Indian-originated Ramayana, the origin of Buddhism and many prayer book series.

The making of a leaf prayer book is very complex. Straight young leaf sprouts have to be chosen and pressed between two boards before exposing them to the sun until withered. Then they are sized into shapes six centimeters wide and 60 centimeters long, an iron stitch is used to carve the manuscripts onto them and then color ink rubbed into them. Finally  they are cleaned and stored.

Because of special care taken to make these books they have lasted until today, and now are carefully looked after by monks in the pagoda. They wrap up the books with cloth and protect them from moisture and from fading in glass cabinet.

Only ancient scripts are carved on the books, so only monks who lived to the pagoda for many years could read them, and only those with good knowledge of the language can write on a leaf for a day, with five columns for each page. One book weighs less than one kilogram, and its thickness depends on the content of the story.

The That Son Bay Nui region (Seven mountains) of An Giang Province has 36 Khmer pagodas where leaf prayer books are stored; with most being kept at Xvayton Pagoda, which was recognized as an historical and cultural relic in 1986.

These leaf prayer books represent the artistic and cultural characteristic of ethnic minority of Khmer group in An Giang, and must be preserved for future generations in An Giang in specifically, as well as for the country as a whole.