Nha Trang, Vietnam -- Travelling to Nha Trang city offers tourists not only a beautiful view of the coast, but pagodas dedicated to preserving the country’s ancient Buddhist traditions. 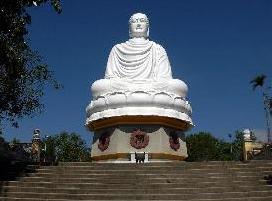 Buddha on a big scale

Long Son Pagoda is regarded as the most famous pagoda in the city. The pagoda is located in Phuong Son Ward, at the foot of Trai Thuy Mountain, just 400m west of the railway station.

Long Son Pagoda was originally built in 1886 under the abbotship of Thich Ngo Chi (1856-1935), an active participant in the anti-French resistance war. The entrance and roof are decorated with a dragon mosaic made of glass and ceramic tiles.

In 1900, the pagoda was damaged by a large cyclone and had to be restored and moved to its current location, farther down the mountain. In 1936, the Buddhist Studies Association made it the headquarters of the Buddhist Association in Khanh Hoa Province.

Every year tourists visit the pagoda to study a large white statue of Kim Than Buddha. The 24m tall statue was built on the site of the original pagoda. Surrounding the figure of the Buddha are seven smaller statues of monks who sacrificed their lives for the country. A pair of dragons guards the Buddha, which is surrounded by lotus flowers. The statue, perched 152 steps above the pagoda, is visible in the distance as one enters the city by train or car and offers an excellent view of Nha Trang city. The statue was recognised as the biggest outdoor statue in the country by Viet Nam’s Guinness Records.

Located west of Trai Thuy Mountain, Hai Duc Pagoda was built under the reign of King Tu Duc (1829-83) of the Nguyen dynasty. Until 1891, the pagoda was larger and included monk’s quarters.

Now the pagoda is used as the Buddhism Studies Academy of central Viet Nam and attracts people who want to learn about the doctrines of Buddhism. Hai Duc Pagoda is considered one of the best places in the country to lead a religious life. Enormous trees offer shade and tranquillity and the pagoda’s 50-year-old library contains many rare and valuable documents and Buddhist prayer books.

Even from far away, people can hear the 1,010kg bell singing from atop the academy.

Strolling along the path which connects the Long Son and Hai Duc pagodas, tourists can enjoy the fresh air and pure silence of the solemn site.

Five sights not to miss

On the southern slope of Trai Thuy Mountain, Linh Phong Pagoda is nestled among the shade of ancient trees. After climbing up hundreds of stone steps, visitors are led to a three-door gate and guided into the pagoda.

First, tourists are shown a statue of Mitreya Buddha, sitting on a lotus throne with a kind, merciful smile.

Next visitors stroll down a path which leads to the Loc Uyen Garden. Six white stone statues stand in the centre of the garden: a large statue of Buddha surrounded by five kneeling disciples.

The magnificent inner sanctum, which lies 40m above sea level, was restored in 2001 by the master bonze and his followers, who spent five years on the construction. The tiles used to cover the roof were designed and made by the head monk himself.

The sanctuary preserves and worships ancient statues of Sakyamuni Buddha and two colossal guarding gods. Many other Buddha statues, such as Amida Buddha, Kwanyin Bodhisattva and 18 Arhats are displayed in the marvellous space.

A collection of discourses (Sutra Pitaka) for prayers are sculpted on the walls of the shrines, describing the tenets of Buddhism.

Kwanyin Bodhisattva is also worshiped at the hexagonal pavilion. A 3m granite statue stands at the centre of the shrine, guarded by a couple of stone lions. In front of the chamber, green stone dragons seem to cast admiring glances at the Bodhisattva.

The final chamber is a vestige of the old Buu Phong Pagoda, which was built to worship Guanyu and his legendary red-haired horse. After a number of historical upheavals, Buu Phong Pagoda was incorporated into what is now Linh Phong Pagoda, but the tradition and beauty of the old pagoda has been preserved thanks to the dedication of Monk Thich Chi Vien.

After a trip to see the three pagodas, Nguyen Kim Ngan, a visitor from Ha Noi, spoke admiringly of the Buddhist constructions.

"I have visited many simply decorated pagodas in northern Viet Nam. They are very different from these pagodas, which have sophisticated and solemn architecture," she says.

After enjoying a relaxing day on the beach and the entertainment of the city, visiting the pagodas offers tourists a peaceful and educational outing.