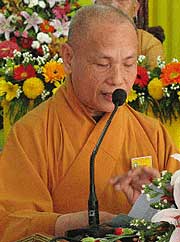 He was speaking exclusively to Sai Gon Giai Phong even as Buddhists across the country were celebrating the 2553rd birth anniversary of the Buddha.

Reporter: How does the spirit of solidarity and harmony of Vietnamese Buddhism show in practice?

The Vietnam Buddhist Sangha has three sects: Mahayana, Theravada and Bhikshu Buddhism. In the past 30 years, all of them have got along with each other in VBS activities. They are integral parts of the VBS. They jointly celebrate the Buddha’s birthday every year.

This has been a good tradition of Vietnamese Buddhism since the country's reunification.

What are the main activities at this year’s birthday celebrations?

Besides official ceremonies to celebrate the Buddha’s birthday, Buddhists will also take part in many social activities, including giving gifts to the poor and building houses for the poor.

During the celebrations, Buddhists in every province and city worked closely with each other to show the Buddhist spirit of solidarity, harmony, gratitude, and returning others’ favours.

What do you think about the development of VBS under its slogan “Buddha's Teachings – Nation – Socialism”?

Compared to the period before 1975, the number of Buddhists has increased ten times. In Ho Chi Minh City alone, there are about 6,000 Buddhists and 1,000 pagodas. Fifty-five provinces and city have their Buddhist executive committees. The country now has four universities, eight colleges, 30 intermediate schools, and 25 preliminary schools teaching Buddhism.

During the Buddha’ birth anniversary, some people voiced opinions that go against the VBS’s viewpoints and the spirit of national harmony. They also delivered appeals contrary to the spirit of Buddhism. What is your comment?

A few persons who are said to belong to the so-called United Vietnam Buddhist Church have recently made announcements against the policy of the VBS. The VBS’ point of view is that everything has a “cause” and “effect” – that is the causal relation. If we do the “cause” in the right way, we will enjoy a good “effect”. If that “cause” is wrong, we will suffer its bad “effect”.

The VBS has been operating on this point of view and has achieved good results.

Recently, the Most Venerable Thich Quang Do launched an online appeal for “Civil Disobedience…”. Is his act in line with the spirit of Buddhism?

His appeal cannot be met since everybody is busy with their daily activities. Nobody can follow this irrational appeal and on that day [when the Most Venerable Thich Quang Do calls for “civil disobedience”], everyone will continue with their routine work, and the reality will prove the futility of his appeal.

Such an act is not good at the time of celebrating the Buddha’s birthday and is against Buddhist tenets.

The VBS has grown consistently in the past several years, whereas the so-called United Vietnam Buddhist Church and the Most Venerable Thich Quang Do have done nothing.

What do you have to say about the harmony between various religions in Vietnam?

Besides two major religions Buddhism and Catholicism, Vietnam have around 10 other religions. Under the Party’s and Government’s religious policies, every religion in Vietnam is equally treated before the law. So they have long been operating together in harmony, not having any contradictions among them.

At major religious ceremonies, dignitaries of various religions visit each other and show their solidarity for the sake of development of all religions in Vietnam.