HANOI, Vietnam -- Vietnamese police arrested a senior official of a banned Buddhist church on Thursday and blocked others from attending a commemorative service for the country's leading dissident monk, the church's overseas spokesman said. 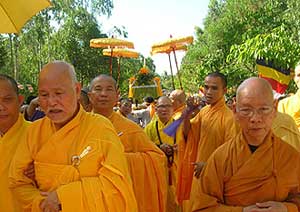 << Thousands of followers last year turned out for the funeral of Quang, 87, who died after decades of internal exile. -- PHOTO: INTERNET

It said he had gone there to attend a memorial service for Thich Huyen Quang, the church's leader who died one year ago.

Thousands of followers last year turned out for the funeral of Quang, 87, who died after decades of internal exile. The UBCV has refused to come under communist state control and was effectively outlawed in the early 1980s.

After he arrived in Binh Dinh for the memorial service, Dinh received a police summons ordering him to report for questioning, the UBCV spokesman said in a statement.

Police wanted to question him Thursday morning about 'slanderous articles' against Vietnam posted on the Internet, the spokesman said. Because of the deep significance of the memorial, Dinh disregarded the police order and was arrested later, the spokesman said.

UBCV's current leader, Thich Quang Do, and the heads of 20 provincial committees of the church, were unable to travel to Binh Dinh, the spokesman said.

'Vietnam denied freedom to Thich Huyen Quang during his lifetime, and they continue to deny his followers the right to commemorate his death,' said Vo Van Ai, director of the International Buddhist Information Bureau.