Petaling Jaya, Malaysia -- On 16th April 2011, the Young Buddhist Association of Malaysia (YBAM) initiated a Japan Earthquake & Tsunami Relief Fund to assist victims of the earthquake and tsunami at Japan. As at 16th April 2011, a total amount of RM236,720.00 was collected. 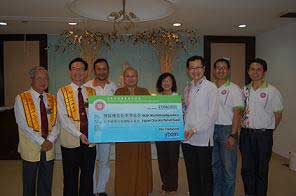 A ceremony was held on 17th April 2011 to hand over the funds to Buddha’s Light International Association World Headquarters, which was represented by BLIA Malaysia Chapter President Mr. Sung Yeow Swee. The handing over was witnessed by Ven. Jue Cheng, Abbess of Fo Guang Shan Malaysia and Singapore.

In his speech, President of the YBAM Dr. Ong See Yew thanked local Buddhist societies and the Buddhist community for their support of the Japan Earthquake & Tsunami Relief Fund raising activity.

"I hope that everyone will continue to show compassion to provide material support as well as religious blessing for the people in the disaster affected areas," says Dr Ong.

Names of donors are displayed on the YBAM website. For further details, please log on to www.ybam.org.my.