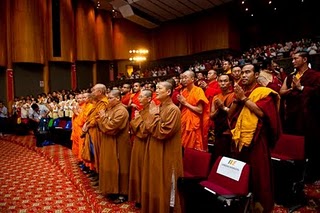 The event signified a breakthrough for the state and the nation as this was the first time that Wesak was acknowlegded on an official level by any state or federal government since the country's independence.

Others who were present during that memorable night include senior monks from all Buddhist traditions namely Venerable Jue Cheng of Fo Guang San Malaysia, Ven. Datuk Dhammaratana Maha Thera of Buddhist Maha Vihara and Ven. Yango Rinpoche of Vajrayana Buddhist Council Malaysia, leaders from more than 45 Buddhist organization based in Selangor and president of the Malaysia Consultative Council for Buddhism, Christianity, Hinduism, Sikhism and Taoism Rev Dr. Phillips Thomas. A group of international students from nearby universities also attended the celebration.

Tan Sri Abdul Khalid bin Ibrahim in his speech praised the Buddhist community for their contribution through welfare, social and educational programs carried out by various groups in the state. Khalid also shared his concern on the need of more land to build Buddhist temples to cater for the increasing number of Buddhist devotees especially in urban areas. He also proposed that from next year onwards the annual Wesak float procession organized by Buddhist groups in Petaling Jaya and Seri Kembangan to be included in the annual tourism calendar of Selangor.

The celebration was injected with performances by some of the popular Buddhist performing groups in the country, such as Messengers of Dharma, i.gemz, Bodhi Group, One Voice One Melody and Mahindarama Sunday Pali School. Dances were presented by the internationally acclaimed Dua Space and the Temple of Fine Arts. The Fo Guang San 24 Seasons Drum Troupe also gave a splendid performance.