Kuala Lumpur, Malaysia -- A group of Malaysians under the loose organisation "Support Network for Women Renunciants in Malaysia and Singapore" has established Malaysia's first dedicated Theravada Nuns Centre with the official opening of Gotami Vihara in a suburb of its capital city Kuala Lumpur. 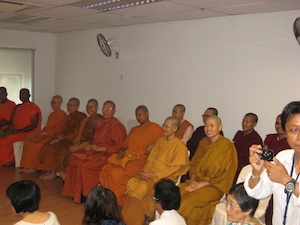 Named after Ven Pajapati Gotami, the Buddha's aunt and the first bhikkhuni, the centre was officially opened by Ven Saranakara Thero.  Also present at the event were several prominent Asian bhikkhunis including Ven Santini of Indonesia, Ven Lieu Phap of Vietnam and Ven Dhammananda of Thailand.

Although the bhikshuni sangha in the Mahayana Buddhist tradition is well established in Malaysia, this is not the case for the Theravada tradition. Thus Gotami Vihara represents the first step to realise the vision of the birth of an indigenous Theravada bhikkhuni sangha.

The Vihara offers accomodation and facilities for Malaysian as well as foreign nuns travelling in the region.  Although many Malaysian women have taken ordination in a variety of 8 precept and 10 precept nuns orders in the Theravada tradition, few have taken the bhikkhuni ordination, citing lack of support as one of the factors.

It is hoped that with support from the local Buddhist community, Gotami Vihara which is now housed in the 3rd floor of a shop-lot would eventually be able to move to more comfortable and spacious premises in the near future.
TOP