Thousands of Buddhists turn up at blessing ceremony in Malaysia 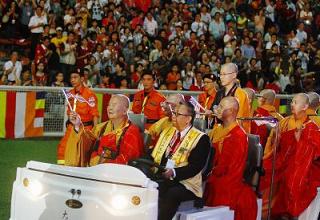 << It’s about faith: Ven Master Hsing Yun (front, with mini flag) being driven round the stadium during the blessing ceremony.

Fo Guang Shan is the largest Buddhist monastry and one of the biggest charity organisations in Taiwan while the 85-year-old Hsing Yun is said to be one of the most influential Buddhist monks in the world.

He is on a five-day visit to Malaysia and had called on Prime Minister Datuk Seri Najib Tun Razak on Friday and presented him with a Chinese calligraphy tilted Ji Xing Gao Zhao, which means “Auspicious Star Shining High Above.”

The evening's event, which started at around 7pm and ended about three hours later, was aimed at strengthening the faith of Buddhists and to propagate divine qualities taught by Buddha.

“They say he won't come here again. I am lucky to have the opportunity to hear him speak,” she said.