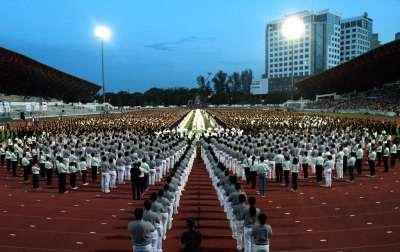 Rachel Tan, a 35-year-old mother of two, could hardly control her emotions at the event held at Stadium Kelana Jaya last night.

“The songs played were very meaningful and touching. As a mother, it was very special to me,” said the company director from Kepong as she held a small lamp as an offering to Lord Buddha.

Tan, who was there with her sons E Minh, four, and E Fe, one, said it was her second time attending the annual ceremony.

Thousands of Tzu Chi members created a formation in the centre of the stadium, displaying the foundation's logo and the letters “TZ 20” to mark its 20th anniversary.

Tzu Chi is a non-profit, volunteer-based organisation which focuses on providing material aid to the needy, and inspiring love and humanity among its givers and receivers.