Wesak in Malaysia: A morning at Thai Wat Chetawan

Malaysia is only one of three countries (apart from Cambodia and Sri Lanka) which is observing Wesak (or Vesak) on May 3, 2015. Kooi F Lim opts to spend the morning at one of Petaling Jaya's most beautiful temple, the Thai Wat Chetawan. Here are his observations.

Petaling Jaya, Selangor (Malaysia) -- It was just after dawn, but the crowd has started to teem into the massive Wat Chetawan compound, the most beautiful Thai temple in all of Petaling Jaya, and one of the most gorgeous outside of Thailand. The day was already bright, and the low sunlight breaks through the fog produced by smoky incense like light steaming through a comb. 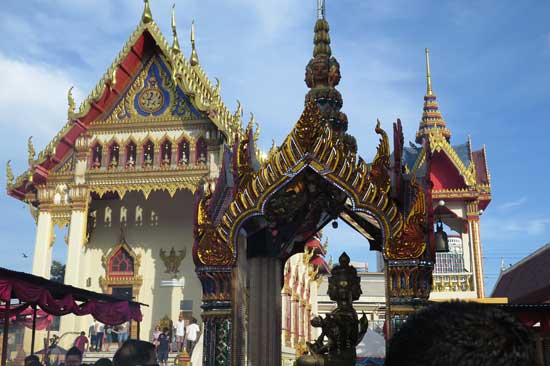 The main shrine hall (ubosot) of Thai Wat Chetawan in Petaling Jaya. This is one of the most beautiful Buddhist temple in the city. Also seen here is the "mondop" (altar shrine) of the 4 Faced Brahmas and the bell tower (on the right). Pic: BuddhistChannel

Apart from the articulate Thai influenced carvings on the temple walls, the smoky, slightly choking incense was an obvious presence. It's strong scents wafted through every nook and cranny of the huge compound - through its intricate entrance gate, the main shrine hall (ubosot), the meditation hall (dhammasala), the bell tower, the monks’ kuti, altar shrines (mondop) and the numerous pavilions that dot the surrounding.

Wesak people - whom the more devout calls them "once a year Buddhists" - wastes no time in performing their duties. Like well trained army ants, they go for the jugular - buying incense, candles, flowers and coupons for lighting lamps. They then proceed to light everything up, starting with the bunch of incense and candles they hold in their hands and then the oil lamps.

Everything has a price. There is a choice of cheap flowers (but marked up for the occasion) or the more customary lotus buds, which fetches up to RM 10 (US$ 3.30) a stalk or a bud. Even for the oil lamps, one needs to pay RM 20 (US$ 6.60) to light them. The monies collected are mainly used to sustain the temple and its activities. With 10,000 or more visitors making a beeline to pay their homage to Buddha, this one day represents an important revenue generator for the temple.

Once the incense are planted onto the large urns strategically located in front of the main shrine, mondops and other pavilions, devotees make a bee line to the ubosot. Here they make offering of flowers to the "Phra Buddha Thameen", a black, stone carved Buddha image personally donated no less by His Majesty King Bhumibol Adulyadej of Thailand.

Rows of flowers adorn the shrine. No sooner a bunch is placed on the altar, workers take it away to make space for other devotees to have their turn to make the offering. Despite the crammed space, most devotees take the effort to make three respectful bows, some making quick silent chants before standing up and moving across to the row of monks sitting by the side on the far right.

This leads to the highlight of the day - chanting and blessings by monks and ending the short session (which lasts no more than 5 minutes) with a shower of "holy water".

The monks softly chants a Thai variety of the Ti-Ratana Vandana (homage to the Triple Gem), five precepts and punnanumodana (sharing of merits). For most however, these chants are exotic and spiritual, and are perceived to have "supra mundane" powers. It is no wonder then that many devotees place their personal belongings - amulets, religious icons and even car keys - onto a tray held by the monk who performs the chanting.

Their belief - mistaken or otherwise - is that these chants contain "spiritual powers" which are then transcended into their items, which when worn or used, protects them from harm or danger. The ceremony ends with the tying of yellow coloured strings on the wrist, a symbolic notion of the presence of the Sangha in the laity. Of course, if one wishes, they can also make a donation to the monk concerned for his service by putting money into a metal box.

Once the main event is over and done with, devotees have a raft of obligatory activities to perform before they call it a day. It is these sub-events that make Wesak carnival like. Among the common and well known ones at Wat Chetawan are as follows: bathing the baby Buddha, ringing the bells at the Guan Yin pavilion, pasting gold paper on statues of monks and Buddhas, praying to the four faced Brahmas, putting coins into the alms bowl of a row of golden Buddhas, making dana offerings (in the from of robes) and paying homage to deceased famous Thai Buddhist teachers in the many mondops.

Not forgetting of course, the delicious, specially prepared Thai food offered at the cafeteria where devotees can partake for a small fee (RM 6 per box / packet).

There have been calls to cull "non-Buddhist" activities at temples during Wesak. Clearly many of the so called rites and rituals commonly carried out at every Wesak day here goes against the Buddha's call to "keep it simple". Some of it are totally against the Vinaya, such as putting coins into the alms bowls and the blessings of amulets. Purists decry the state of "religious contamination", which only helps to project negative ideas of what true Buddhist teaching really is.

Yet those arguing for these activities say that since Buddhism is not a state sanctioned religion, it depends mainly on the support of lay devotees. In Malaysia, it is common to see the statues of Guan Yin in many Thai temples. This is not surprising, given that a bulk of the local Buddhists are of Chinese descent with Taoist background. Temple administrators say that they are only giving back what devotees want. And to them, survival of Buddhism is paramount, even if in a corrupt form.

And survivability means to have the ability to raise funds. To do this requires specific activities and rituals because it can be monetized. The monetization aspect secures the temple's survivability, and hence supports the continued existence of Buddhism in this country.

Proponents also say that the teaching and learning of Buddhism are promoted throughout the year, although these "educational activities" are attended by the hundreds rather than by thousands. Perhaps when a critical mass of "learned Buddhists" are attained, then activities held on Wesak may be more reflective of what actually constitutes as "true Buddhism".

Nevertheless, how this scenario plays out ultimately depends on the direction taken by the temple's administrators. It is easy to hoist ignorance as reason on the part of devotees, but meeting the needs of their ignorance is not a viable solution.

On a positive note, it can be said that Buddhist temples have generally transformed more Malaysians to become Buddhists, unlike their Taoist kins a generation ago. The seeds of Dharma practice can only be sown in a supportive environment. In this sense, let us "pray" then that the critical mass of learned Buddhists can materialize sooner then later. 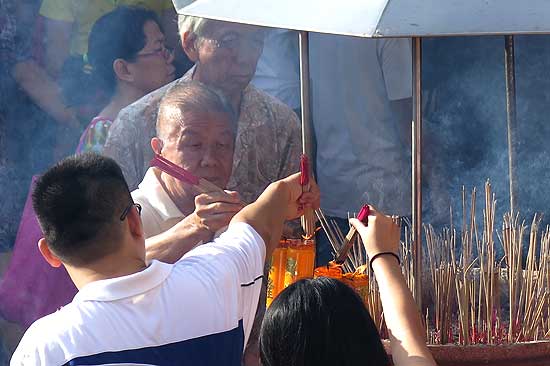 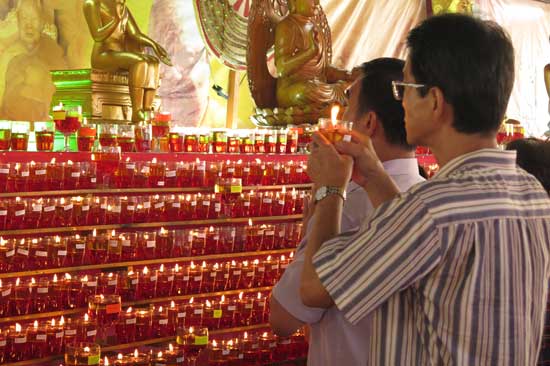 Offering of light by devotees is one of Wesak's highlight 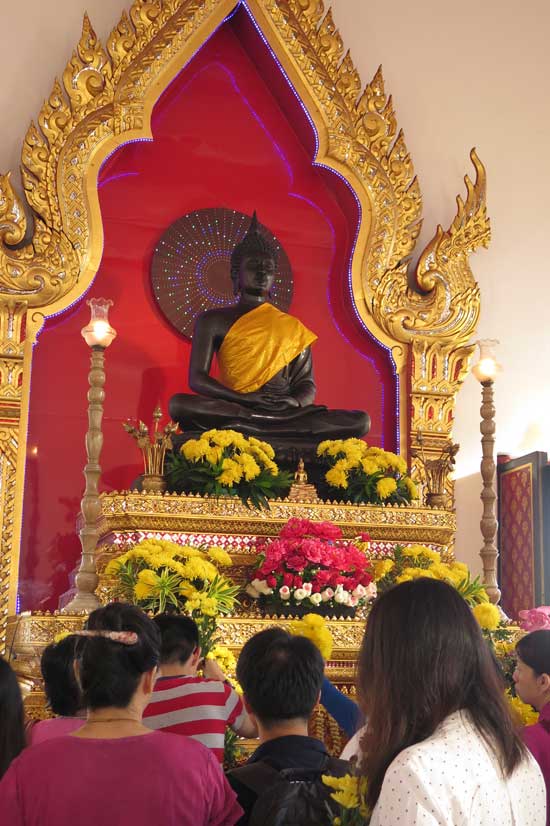 Offering of flowers to Buddha inside the main shrine (ubosot) 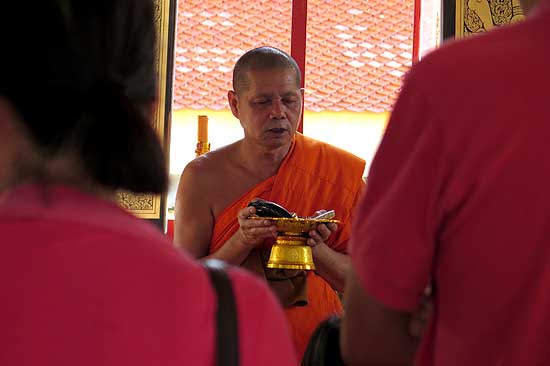 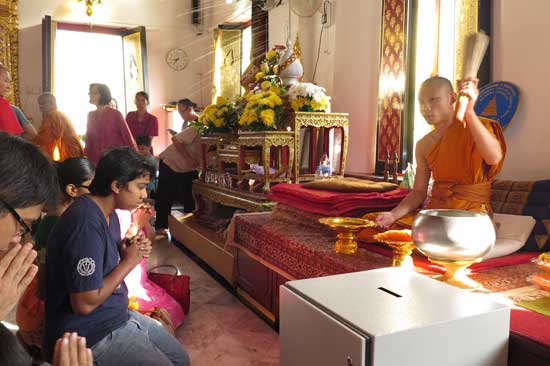 Spraying of "holy water" marks the end of the chanting session 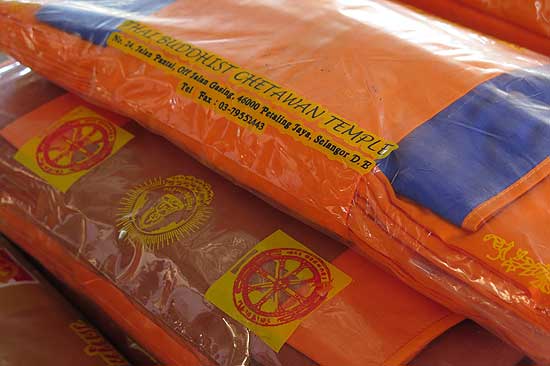 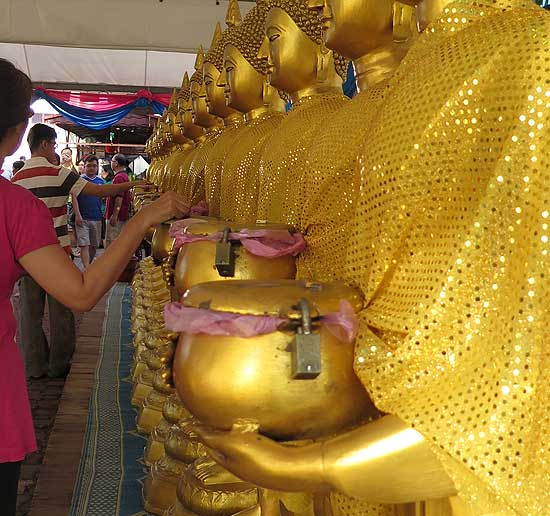 Putting coins into "alms bowl", an activity popular with both adults and children at Wat Chetawan. Some question its "Buddhist correctness" 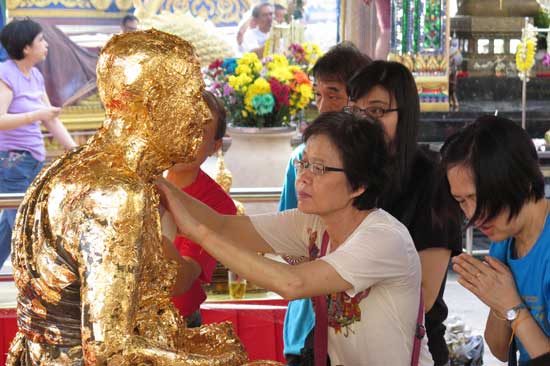 Another popular activity - pasting gold paper onto statues of monks and Buddhas. 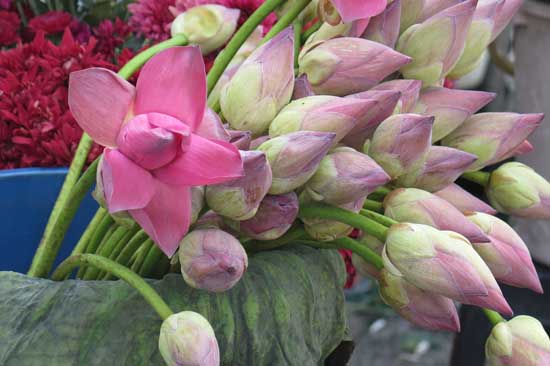 Offering of flowers, including the lotus bud is a mainstay event at every Wesak. 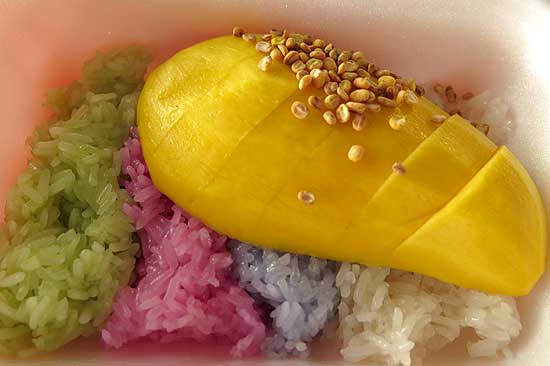 Reward at the end of the day - an authentic sumptious colourful Thai glutinous rice with mango.

All pictures by BuddhistChannel (C) 2015