Kuala Lumpur, Malaysia -- It was almost dusk. The sky had turned a deep blue and the street lamps which had come on grew brighter in the increasing darkness. Despite a light drizzle, a crowd had gathered – families with children, elderly folk, young people, and Caucasians – to watch the Wesak Day procession from Buddhist Maha Vihara Temple in Brickfields, Kuala Lumpur. 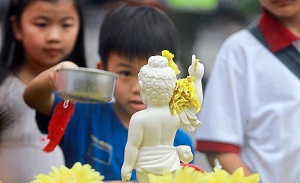 << ‘Bathing the Buddha’ is a ceremony practised by Buddhists around the world on Wesak Day. Photos: The Star

Although I was not a Buddhist and didn’t really understand the significance of the day at that time, there I was, among the people. I had followed a bunch of photographers to town for the sole purpose of photographing the colourful floats at the procession. This was my first “encounter” with Wesak Day several years ago.

Fast-forward to the present day, it is once again Wesak Day. Wesak, or Vesak, is celebrated by Buddhists around the world.It is said to be one of the most important festivals in the Buddhist calendar as it observes three significant events in Gautama Buddha’s life: his birth, enlightenment and death.

During the festival, devotees usually make offerings of flowers, joss-sticks and candles to remind themselves that, just as the flowers wither and die, and the joss sticks and candles burn away, life too is temporary and everything passes on.Temples hold special services and welfare activities like blood donation campaigns, collection of donations for charity, feeding the poor and needy, and having vegetarian meals. Some Buddhists even release caged birds to symbolise freedom from captivity.

The “Bathing the Buddha” ceremony also takes place during this time. Water is poured over the shoulders of a Buddha figurine to remind Buddhists to purify themselves from greed, lead noble lives, and practise kindness.

The highlight of the day is a candlelight procession which includes traditional lion and dragon dances, and colourful floats. In Malay­sia, Wesak Day is a public holiday and people of all races and religions often gather to watch this procession together.

Because of the various types of Buddhist cultures in the world, it is celebrated on different days in different countries.Chinese Mahayana Buddhists (like those in China, Hong Kong and Korea) celebrate it on the eight day of the fourth lunar month, which fell on May 14; Theravada Buddhists celebrate it on the Uposatha or first full moon day. In Malaysia, Singapore and Indonesia, it is celebrated on the 15th day of the fourth lunar month, which is today.

Besides the well-known Buddhist Maha Vihara Temple in Brickfields, many other temples throughout Malaysia are a hive of activity on Wesak Day. Here are five of them. 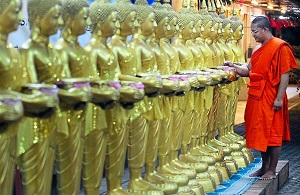 Commonly referred to as Wat Chetawan, this famous Thai Buddhist temple complex in Petaling Jaya is home to the most beautiful Thai temple in the Klang Valley. Wat Chetawan is one of the few royal sponsored temples outside of Thailand, with  distinctive structures such as The Ubosot, The Dhammasala (Meditation Hall), The Bell Tower, The Monks’ Kuti, The Sala, The Mondop, The Brahma Pavilion, The Kuan Yin Pavilion, The Columbarium, The Maitreya Buddha Pagoda, The Sleeping Buddha Shine and The Temple Monument Sign.

This, and the Buddhist Maha Vihara on Jalan Brickfields, are Theravada Buddhist temples of Sri Lankan origin. Also known as Sri Jayanti Buddhist Temple, it is affiliated with the Sri Jayanti Welfare Organisation which provides assistance to the poor, less fortunate and elderly.

The Butterworth Buddhist Association is located in the industrial town of Mak Mandin. Besides chanting, prayers, offerings, and special ceremonies, there are also food stalls and a blood donation drive, come Wesak Day.

The reason for the name is the temple’s inner walls which are covered, from top to bottom, with thousands of tiles carved with the image of Buddha. There is a white jade Buddha statue sitting inside the hall.

Many Buddhists come to the temple to take part in the Wesak Day celebrations which include special Dharma talks, chanting, special ceremonies, exhibition booths, as well as stalls selling stuff for charity. Vegetarian food is served and there are also musical performances in the beautiful gardens next to the temple.

Located in Simpang Tiga, Kuching, Poh Ka Buddhist Temple was built in 1900, making it among the oldest temples in Malaysia. There are plans to build a three-storey monastery called Poh Ka Monastery next to it, which is expected to be completed in three years’ time. Wesak Day celebrations at Poh Ka Buddhist Temple sees crowds of devotees and visitors taking part in the prayers, chants, offerings and special ceremonies.
TOP