KUALA LUMPUR, Malaysia -- News portal "Free Malaysia Today (FMT)" reported on September 3 that the chief monk of the Sri Lankan Buddhist temple in Sentul was assaulted by a small group of demonstrators, who were protesting the visit of former Sri Lankan president Mahinda Rajapaksa to Malaysia. 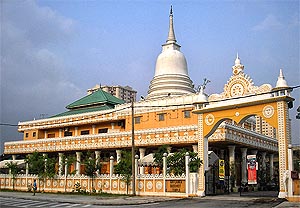 << Sri Jayanti Buddhist Temple in Sentul, Kuala Lumpur, where it was reported that the chief monk was attacked by a group of people protesting the visit of Sri Lanka's ex-President Mahinda Rajapaksa to Malaysia.

The news portal reported that a group of people had gathered at the Sri Jayanti temple when rumours of Rajapaksa’s supposed visit began to spread.

When the Chief monk Venerable S. Sarananankara came out of the temple in attempts to pacify the protestors, some individuals questioned him about Rajapaksa’s arrival. Following shouts of vulgarities and obscenities, the assault began after "one person touched the monk’s face, prompting another to throw a punch towards the venerable. Two members of the crowd were seen kicking the monk, forcing him to retreat inside the temple", reports FMT.

Police present there prevented the crowd from further attacking the monk, and MIETA chairman A. Elangovan entered the temple together with the police to apologise to the monk.

FMT quoted the MIETA Chairman, saying that "his group had gathered at the because we want to give a stern warning to all Buddhist temples to not allow the mass murderer here.”

Tamil groups blame Rajapaksa for being behind the massacre of 100,000 Tamil Sri Lankans during the country’s 25-year-long civil war.

Elangovan was also quoted as agreeing that "it was wrong to assault anyone at a protest and said he did not know who the attackers were".

“They were a bit emotional. But still, we can’t beat them up because this is a religious place.”

Elangovan was also quoted to have agreed with the chief monk, saying that "no one should be restricted from coming into a temple. This is a religious place. We have no right to dictate who should come here and not.”

Meanwhile, representatives from the Nalanda Buddhist Institute visited Ven Saranankara soon after the incident was reported by FMT. The monk related the incident to the group, saying that while he was "shoved by a few individuals, he was not harmed at all."

Nevertheless, the venerable does not dispute the report by FMT.

According to Nalanda's report, the monk explained the reason for him to meet the crowd, which was to "advise them that they had been misinformed about Mahinda Rajapakse’s intended visit to the Vihara." However, the expectation that the crowd would disperse peacefully did not materialise.

Ven. Saranankara has considered the matter to be “resolved”, and that he was not angry at anyone. He further reminded "devotees to exercise restraint and understanding in handling the incident, knowing how easily people are caught up with their emotions."

The Nalanda report also mentions that Ven Saranankara said the vihara has excellent relationship with the local Tamil community and that he does not wish to see this harmony jeopardised.

The venerable also implored members of the Buddhist community from issuing further statements or to make public comments on the matter, so as not to complicate any investigations that the police may perform.

Ven. Saranankara's final words in the meeting was: "I am fine. Let's move on."
TOP