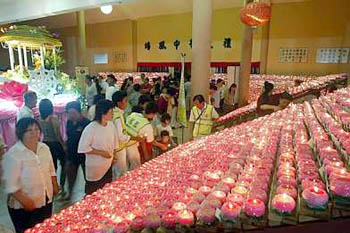 << GRAND CEREMONY: Devotees lighting candles and at the same time contributing to the cancer fund at the Seck Kia Eenh Temple in Malacca.

At the end of the night, over RM200,000 proceeds from the sale of the candles, priced as RM20 each, was collected for the fund.

Organising chairman of the blessing ceremony, Joy Chan, said he was overwhelmed by the support shown by the devotees.

The cancer fund, set up by Chan, a cancer survivor himself on Wesak Day in 2000 in conjunction with the 80th anniversary of Seck Kia Eenh Temple, had since helped more than 150 patients from various races and religions.

The Buddhist monks, mainly from Theravada, Mahayana, and Vajirayana schools of thought, took turn to chant at the blessing ceremony.