The "Journey of a Great Man" starts today

Week long of activities begin with an exhibition and novitiate program to commemorate the 3 month memorial of the late Ven. Dr K Sri Dhammananda

Kuala Lumpur, Malaysia -- It is said that those who have been bestowed with greatness not only leave behind memories but also marks that streaks across skies and auras that permeate all the paths which they have been trodded upon. 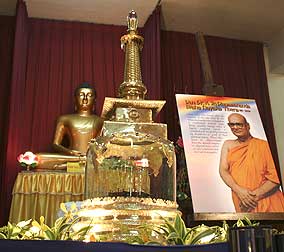 The presence of such a one is ubiquitous, even though it is conciously clear that the person is no longer around. Such a one can be said of the late Venerable Dr K Sri Dhammananda, who passed away on August 31, 2006.

From a young, humble monk sent to a country who have yet to gain independence in the mid fifties, Ven. Dhammananda's contribution to the propagation of the Dhamma in Malaysia can be seen from how roots of Buddhist education have firmly been planted into the lives of countless adherents.

From the Sunday Dhamma schools to regular Dhamma talks and the establishment of countless Buddhist societies in schools and universities, the late venerable's influence have expanded well beyond the walls of the Maha Vihara. So much so that those who have been touched by Buddhism will somehow feel that he had a role in it.

Ask the lady who helps out in the temple kitchen to the teacher who leads 15 kids a week chanting "Namo Tassa" and the committee leader in charge of an upcoming seminar - they will tell you that the late venerable's shadow somehow hovers around them at some turn. He may have gone, but his teachings, words of wisdom and compassionate teasing still lingers on.

A great person never die, some say. They just linger on. And so true is the case of the week long, "three month memorial programme" which was launched today at the Buddhist Maha Vihara in Kuala Lumpur.

The late venerable's personal effects - his robes, cloth bag, fan and other stuff such as shaving pot and brush, his spectacles, books, letter opener and even toys ("I'm preparing for my second childhood") are being exhibited for public viewing.

Held at the Wisma Sri Dhamma (adjacent to the main Ashoka Hall), the exhibition also showcases a pictorial chronology of the late venerable, from the days he came to Malaya (pre-independence Malaysia) to the meetings with dignitatries and other Buddhist leaders and to the final journey of his life.

The week long memorial began today with the novitiate program, an activity pioneered by the late venerable and one which he had personally held dearly to. About 50 novices were ordained today, led by Ven. Mahinda.

Other highlights of the week long memorial includes Dharma talks to be led by famous monks such as Ven. Hai Tao Master from Taiwan (Nov 27, 8 pm), Phakchok Rinpoche from Tibet (Nov 28, 8 pm) and Ajahn Brahmavamso (Nov 29, 8 pm). The talks are opened to the public and are free of charge.

A key highlight of the exhibition is the display of the venerable's bone relics, enclosed in a glass stupa. The relics will be interned into a specially built stupa on December 2, 2006.