Kuala Lumpur, Malaysia -- The relics of Malaysia and Singapore's revered Chief Monk, the late Venerable Dr K Sri Dhammananda was interned in a specially built pagoda in a ceremony to mark his 3 months memorial today. The venerable passed away on August 31, 2006. 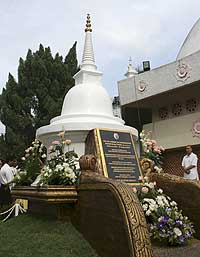 << The relics of the late Venerable Dr K Sri Dhammananda was interned in this mini pagoda, the first of such memorial for a resident monk of the Buddhist Maha Vihara

About 200 monks and nuns of various traditions, as well as close to 2,000 devotees were present at the Buddhist Maha Vihara to witness the occasion. The event was historical in many ways as the late venerable was the first resident monk of the temple who had passed away. He was also the first monk to have his relics interned within the temple's compound.

The ceremony began at 9 a.m. amidst a cool, pleasant morning and calm overcast skies. Four speakers gave short eulogies about the venerable and also touched briefly on the Buddhist meaning of relics worship.

Mr Sarath Surendre, President of the Sasana Abhiwurdhi Wardhana Society (SAWS) and custodian of the Buddhist Maha Vihara where the late venerable had been the Chief monk for 54 years, said that Dr K Sri Dhammananda was one of the most respected monk in the world. He said that given the venerable's immense service, it was only right that a permanent memorial in the form of a pagoda was established to remind generations to come the life of such a great person.

The next speaker, Mr Ang Choo Hong, who is the President of the Buddhist Missionary Society of Malaysia, touched on the meaning of relics worship in Buddhism. He recalled a story how Ven K Sri Dhammananda told him that if all the Buddhist relics were to be put in one place, it would make up a mountain. He said that relics of Buddhist masters should serve as a memory of those who had given great service to mankind, rather than merely be objects of worship.

Ven. Dhammaratana, the incumbent Chief monk of the Buddhist maha Vihara then gave thanks to the many monks and nuns who had converged on the temple to witness the occasion. He particularly singled out the presence of Datin Seri Paduka Zaleha Ali, an elderly Muslim lady who knew the late venerable very well. Ven. Dhammaratana called her "a true sister for all Malaysians".

The final speech of the morning was delivered by Ven. Piyananda, who is the International Religious Advisor to the President of Sri Lanka. The venerable gave a short discourse on the meaning of relics worhip in Buddhism. He said that while it was important to worship and to honour Buddhist relics, it was more essential to understand the reason behind it.

Quoting a saying that "what you worship you become", Ven. Piyananda said the late Dr K Sri Dhammananda's relics will serve to remind everyone that there once lived a man who was kind and compassionate, worthy of respect, wise and truly learned, values which we all should emulate.

"He was without doubt a man of great skill and ability, not only in Dharma knowledge - he could clearly explain things as it is, even difficult subjects - but also a master in handling people. He knew peoples' character very well," said the venerable. Mr R A Janis was given the honour as the last person to emplace the ashes into the urn. Mr Janis served as the late venerable's assistant (kapiya) when he first came to the temple from Sri Lanka 54 years ago. >>

After the speeches, representatives from key Buddhist societies and associations were invited to place the ashes and relics (wrapped in yellow bundles) into an urn. Ven. Mahinda, being the eldest Malaysian disciple of the late venerable, led the way. The last person given the honour to make the final placement was Mr. R A Janis, who served as the late venerable's assistant (kapiya) when he first came to the temple from Sri Lanka 54 years ago.

Once the ashes were placed into the urn, a short blessing ceremony followed. The urn was then brought to be interned into the specially built mini pagoda. Ven. Dhammaratana led the short procession from the ceremonial dias to the pagoda. He guided a small retinue of monks to circle the pagoda three times before the urn was placed inside it.

The ceremony concluded with the official revealing of the pagoda's plaque.