Can the living help the dead? Some Chinese believe they can 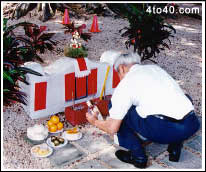 << Qing Ming, also called as Tomb Sweeping Day and Clear Brightness Festival is a day where the Chinese people remember and honour their ancestors.

“The Chinese believe they can gain merits through charitable acts such as helping the poor, donating money to the needy or orphanages. They can also gain merits when they ask monks to chant sutras for the dead,” says Lai, who is also adviser of the Society of Confucianism Malaysia and Young Buddhist Association Malaysia.

However, he opines: “It is better to perform such acts to gain merits for yourself while you are still alive.”

Some wealthy Chinese hold the koong tuck ritual for their departed parents, out of love, filial piety, gratitude and in remembrance of their loved ones.

Lai explains: “Such rituals are commonly performed on the seventh day or 21st day after the death of a person. A bigger koong tuck is held on the 49th day, especially by the Hokkiens. After 49 days, the Buddhists believe, the soul would have departed this world.”

Although some people think that it would no longer be significant to hold such rituals after these designated days, there are some Chinese families who are more flexible about when to hold such a ritual, such as during the funeral ceremony, to avoid the hassle of having to gather the next-of-kin again on another day and to cut costs.

Others perform koong tuck even after three years or 30 years, says Lai. For whatever reasons, they regard themselves as still performing “a religious service to the dead”.

Customarily, odd-numbered days (such as the third, fifth or seventh day) are picked for such “inauspicious” rituals. Culturally, the Chinese reserve even-numbered days for auspicious matters.

Koong tuck is commonly observed during Qing Ming (Chinese All Souls Day, which falls on April 5 this year) or during the Chinese seventh lunar month (the Ghost Month). The ritual can take place at one’s home or at a temple.

“According to the Buddhist belief, when a man dies, his spirit leaves this life and enters another realm. Chanting sutras can help the spirit to have a better afterlife,” explains Lai.

“The term chiu toh (in Cantonese) refers to the uplifting of the dead. The purpose of koong tuck is to achieve chiu toh (salvation of the soul),” says Lai.

He concedes that the offering of paper paraphernalia to the dead, that is part of this ritual (as well as a practice during Qing Ming and the Ghost Month), is a mix of religious practices, namely, Confucianism, Taoism and Buddhism.

Paper paraphernalia such as hell money, or paper mansions and other materialistic goods, are burned for the use of the departed in the afterlife.

Some Chinese families hold koong tuck to add or transfer merits to their departed ones and to relieve them of the sufferings in the afterlife, says Ong Seng Huat, Xiao-En Cultural Endowment chief executive director.

According to him, such a ceremony is performed seven or 49 days after a person’s death or to mark the first and third death anniversary.

The original concept of koong tuck was based on the traditional idea that there is an afterlife society.

The Chinese believe that a person who has done good deeds will be rewarded in the afterlife. They believe he has accumulated merits to ease his sufferings there.

What happens to an evildoer or a person without merits?

Ong surmises: “The person who has no merits will not be respected and will face a lot of punishments in the afterlife society. Those who performed misdeeds will face even horrible sufferings.

“Filial piety is one of the good ethics of the Chinese. Whether the elders are right or wrong, their descendants will remember that they brought them into this world. Our patriarchs are symbols of tradition, culture and good values.”

Hence, when the elders pass on, the descendants show their filial piety and gratitude, and fulfil their obligations to their dearly departed.

Can the living help the dead?

Some Chinese believe they can. They are obligated to help their departed family members to counter their problems in the afterlife society. One way of doing so is to add merits to them.

“In a kong teik, the Chinese families hope that the Supreme Power, such as Amitabha in Buddhism or creator of Tao in Taoism, will come and rescue the suffering spirit,” saysOng.

“The Supreme Power is invited, in the hope that he will influence the spirit of the departed and change his mentality so that he can go to a higher stage of ‘life’. Unknown spirits are also ‘rescued’ in such rituals.

Ven Rev K. Sri Dhammaratana, the Chief High Priest of Malaysia and chief monk of Buddhist Maha Vihara in Brickfields, Kuala Lumpur, says: “In orthodox Buddhism, there is no fixed day to hold memorial services for the dearly departed. Sometimes such a service is held at a time convenient to all relatives.

“In the transfer of merits, we need to focus our minds on the departed ones. Sometimes the deceased can get the merits and sometimes they can’t, if they are in the process of being reborn or have been reborn.”

On Sept 7 last year, over 1,000 Buddhist devotees and 140 monks attended a transfer of merits ceremony to commemorate the seventh day of the demise of Ven Rev K. Sri Dhammananda Nayaka Thera, the former Chief High Priest of Malaysia and Singapore.

Ven Dr K. Anuruddha Maha Nayaka Thera, a prolific Buddhist teacher and former vice chancellor of the Buddhist and Pali University of Sri Lanka as well as a close friend of Rev Dhammananda, says: “When someone (the departed) acquires merits from his relatives and friends, he will be very happy.”