They flicker but they dont burn

Penang, Malaysia -- THEY looked like lit candles from afar, flickering in the darkness. But these were not conventional candles. 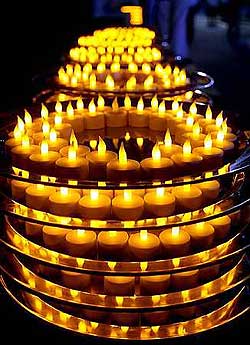 To welcome the Buddha Year 2551 in a more unique fashion, 2,551 electronic candles were lighted at Bayan Baru’s Than Hsiang Temple’s car park during the temple’s ‘Merit and Wisdom Nite’ on Wesak Eve in Penang.

The electronic candles were plac-ed in tall plastic cups arranged together on the ground to form the number ‘2551’ and two Buddhist swastikas at the temple car park during the lamp-lighting ceremony.

When the LED (light emitting diode) candles were first distributed to devotees for prayers, they were the focus of attention as many of the devotees had never used electronic candles for prayers before. Many waited in anticipation to receive the candles to inspect them more closely.

Nurse Nina Ewe, 59, found the use of electronic candles for a religious occasion to be very unique.

“I find it cute too because of its small size. You can hold and wave it around without being afraid that you could hurt yourself or others around you.

“It is also safe for young children. Now, they can hold the candles and really feel that they are a part of the praying ceremony,” she said.

Imported from Zhejiang, China, the electronic candles generated less heat and were safer, cleaner and smoke-free. Each candle had a rechargeable battery that could last for about 10 hours and a small switch at the bottom. 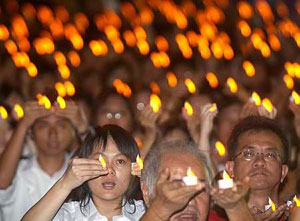 Shining brightly:A sea of flickering lights can be seen at the car park >>

Unlike the conventional wax candles, the devotees could happily hold the LED candles in whatever way they wanted throughout the chanting-cum-blessing ceremony without having to worry about getting burnt and the candles blowing out.

During the ceremony, Dr Koh also witnessed a mock cheque presentation where the Than Hsiang Temple donated RM500,000 to Sekolah Menengah Phor Tay for its relocation from Bagan Jermal Road to Sungai Dua.

Temple abbot Ven Wei Wu, in his speech, appealed to the government to speed up the move of SM Phor Tay to its new location at Sungai Dua to enable students in the area to move into the new school premises the coming academic year.

He urged Buddhists and the public to support the moving of the school and appealed to Buddhists to support education at all levels, from kindergartens to universities.

“We often ignore education be-cause we do not see the results im-mediately, unlike welfare work. But education is more important.

“The Dalai Lama has stressed the importance of education in Buddhism because it will enable us to re-express the wisdom of Buddha in the 21st century,” he said.

Devotees at the ceremony were also entertained with live performances of songs and hymns in praise of Lord Buddha by the Than Hsiang Youth Group, Than Hsiang Kindergarten, Than Hsiang Choir Group and local singers.

All proceeds collected at the event will go to the Mitra Welfare Fund, the International Buddhist College project and SM Phor Tay.