The Giant Buddha Foot motif will be displayed at the Buddhist Culture and Arts Festival 2007 (BCAF), slated to be the largest event ever to jointly held by 38 of the largest organizations in Malaysia

Seri Kembangan, Selangor (Malaysia) -- In conjunction with the Buddhist Culture and Arts Festival 2007 (BCAF) held at the Malaysia International Exhibition & Convention Centre, the Dhammaduta Youth (D2Y) under the  auspices of the Buddhist Missionary Society Malaysia Youth Section and the Subang Jaya Buddhist Association will be assembling a 53 feet by 38 feet design of the Buddha’s foot motif consisting of approximately 84,000 lotus buds. 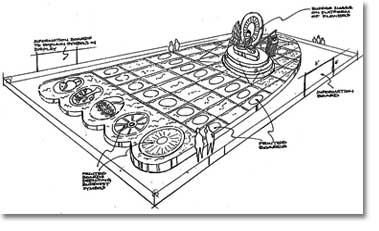 Incorporated into the huge foot motif will be several important Buddhist symbols used to represent the Buddha and His teachings for the past two thousand five hundred years.

“It is known that for hundreds of years after the Buddha’s passing, devotees paid respects to Him in the form of the foot motif or as a lotus flower,” said Tan Siang Chye of Subang Jaya Buddhist Association, designer of the lotus arrangement.

“The human form representation of the Teacher was initiated only after Alexander the Great made contact with the Indian civilization of that time and shared with them the art of Greek sculpture. This explains why the early Buddha images resembled Greek statues.”

Project coordinator, Koh Mui Han of the Dhammaduta Youth said,”84,000 is a meaningful number in Buddhist belief and the lotus buds will be specially flown in from Thailand.”

Devotees are able to sponsor these flowers, with the knowledge that they are offering them to the Lord Buddha. Anyone interested in making this offering should contact any one of the fifty Buddhist organizations jointly organizing the Buddhist Culture and Arts Festival.

Information boards explaining the meanings of the symbols will be produced and put up near the foot motif. Mui Han added, ”Buddhist culture is rich with symbols. The public will be able to learn the meanings and understand that Buddhists do not mindlessly pray to pictures and inanimate objects”.

Members from both organizations will be on hand to assemble the arrangement and help devotees place the lotus flowers. It is planned that the entire lotus arrangement will be complete by Saturday, 9 June for the public to view.

More About The Buddha Footprint

For the first centuries after His passing, the Buddha was represented by attributes and symbols. Early Buddhist artists represented the Buddha aniconically i.e. He was not shown in human form, but represented by symbols such as the umbrella, the bodhi tree under which he attained enlightenment, the wheel, a throne and a set of footprints

It is said that prior to His death the Buddha left an imprint of His foot on a stone near Kusinara, the site of His passing. This was a reminder to the devout of His physical existence. A larger than life size footprint at Anuradhapura, Sri Lanka, has been respected by the Singhalese people for centuries. In many other Buddhist sites, footprint motifs can be found carved into rock.

From the scriptures, it has been ascertained that the Buddha did not encourage followers to be overly devoted to His physical form. Instead He encouraged them to truly understand His teachings and practice it, exhorting, “He who sees my teachings, sees Me”.

Early Buddhists had such reverence for the great teacher that they avoided sculpting His likeness, even for purposes of veneration. However the first human representations began to appear due to the influence of Greek craftsmen in India.

Adoration of the footprint

The adoration of his feet, or Buddhapada became a prominent feature of Buddhist practice. These footprints often show Dharma-wheels on them, one of the 32 physical marks of a Buddha.

According to Buddhist belief, the body of a Buddha would have 32 distinguishing marks on it. The specific marks associated with the feet are:

1.   When the Buddha walks, He places His foot evenly on the  floor
2.   The soles of his feet are imprinted with wheels (symbols)
3.   He has projecting heels
4.   He has long fingers and toes
5.   He has soft and tender hands and feet
6.   He has webbed hands and feet
7.   He has arched feet

The Wheel symbol found on the footprints can be seen very often in Buddhist culture. The wheel has been depicted with varying numbers of spokes.

The Eight-Spoked Dharma Wheel or Dharmachakra symbolises the Buddha's turning of the Wheel of Truth or Law (dharma = truth/law, chakra = wheel) and is associated with the first sermon delivered at Sarnath, a town near modern day Varanasi.The wheel on the flag of India is the Asokan wheel, said to be used by the great Buddhist emperor, Asoka.

Historians contend that the representation of the Buddha in human form (as statues) was an art learnt from Greek craftsmen and artisans who followed Alexander the Great on his conquests of the East. It is seen that early representations of the Buddha bear Greek (or European) features. In many ways these sculptures incorporated the features of Hellenic gods, an unusual development as the Buddha had strongly declared that He was not a god.