The Buddhist Arts and Culture Festival (BCAF) - the largest undertaking in the history of Malaysian Buddhism - is expected to draw 100,000 visitors Jointly organized by 50 Buddhist societies nationwide, the festival will be the largest undertaking in the history of Malaysian Buddhism.

At the exhibition, the public will get to see the rich heritage, culture, and teachings of the religion across the entire spectrum of the three main Buddhist traditions – Theravada, Mahayana, and Vajrayana.

“Buddhism provides a rich arts and cultural platform to reach people's heart and minds in many ways. It is the first time that a Buddhist arts and culture festival is being organised on such a large scale,” said Ven B. Sri Saranankara.

The festival site will be divided into four main areas - the exhibition area, the cultural performances section, the film segment, and an area for charitable sales.

One of the key highlights of the event is the display of Buddha’s Relics. The relics are regarded national treasures in Buddhist countries like Sri Lanka, Thailand, and Myanmar, while the Buddha and Bodhisattva statues portray a colourful representation of different Buddha forms. To house the relics, a purpose-built pavilion will be erected at the exhibition hall for public viewing. 84,000 lotus buds will be used to make this giant Buddha Footprint >>

Incorporated into the huge foot motif will be several important Buddhist symbols used to represent the Buddha and His teachings for the past two thousand five hundred years.

“It is known that for hundreds of years after the Buddha’s passing, devotees paid respects to Him in the form of the foot motif or as a lotus flower,” said Tan Siang Chye of Subang Jaya Buddhist Association, designer of the lotus arrangement. 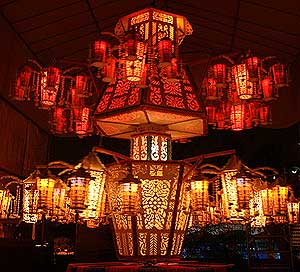 << Giant lanterns will also be displayed

“The human form representation of the Teacher was initiated only after Alexander the Great made contact with the Indian civilization of that time and shared with them the art of Greek sculpture. This explains why the early Buddha images resembled Greek statues.”

Project coordinator, Koh Mui Han of the Dhammaduta Youth said,”84,000 is a meaningful number in Buddhist belief and the lotus buds will be specially flown in from Thailand.” Devotees are able to sponsor these flowers, with the knowledge that they are offering them to the Lord Buddha.

Another highlight is a giant 40 feet Mandala, a traditional form of Buddhist art in Tibet. The Mandala has intricate designs representing the entire cosmos and all sentient beings it contains, but at the end of the exhibition, it will be 'destroyed' with a swipe of hand to give a poignant reminder that all things in the universe are impermanent and subject to decay and dissolution.

There will also be a 84,000 light-bulb Giant Pandal that will display 28 episodes or stories connected to the life of the Buddha.

Devotees can also make a donation of RM10 to light one of the 84,000 oil lamp offerings. There will also be an 84,000 lotus-buds offering to the Buddha.

A photography exhibition of 'Journey to the West' will render the journey of how Buddhism was brought to mainland China from India during the Tang dynasty.

Cultural performances will include hymns in Mandarin, English, and Pali by Buddhist Dharma Schools and other traditional dances from the different Buddhist countries.

More than 100 booths will also be set up throughout the exhibition period selling a wide selection of Buddhist paraphernalia, books, CDs, and devotional items. Food and drinks stalls would also be available.

Visitors will also be able to offer chants and devotional prayers at a special area beside the pavilion. A blood donation campaign will also take place at one of the convention hall's foyer.

Public Transport: Take the Commuter train from KL Sentral to the Serdang KTM Commuter Train Station. Trains depart every 20 minutes. A special "Tiratana" shuttle bus service will be available at the Serdang Station to ferry visitors to the MIECC.

The Buddhist Channel is the official web media for the BCAF.