KUALA LUMPUR, Malaysia -- Some 5,000 needy students of all races and religions across the country will receive school necessities from the Sri Lanka Buddhist Temple next month. 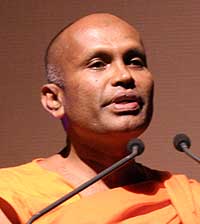 Students from 200 government schools, children receiving assistance from the Malaysian Children’s Aid Society (MACAS) and those living in orphanages will each receive RM100 worth of school supplies including uniforms, bags, shoes, stationery and exercise books under Educare 2007.

Two thousand of them will receive their gifts at the temple in Sentul on Dec 9, during a fun-filled day with numerous activities for the children. The rest will be distributed throughout the country.

The annual project was started in 2001 by the Siri Jayanti Sunday Dhamma School, which is run by the temple.

Saranankara Nayaka Maha Thero, the chief monk and principal of the school, said he became concerned when parents began approaching him for financial aid for their school going children. The project was born after a meeting with the teachers at the school and parents of some of the children.

The children are selected by the headmasters of their schools.

Parkson Grand Corp Sdn Bhd is helping out by placing collection points at all its 28 stores nationwide. Those who wish to help Educare 2007 can deposit school items there for distribution.