Converting The Addicts: Transformed By Buddhism

Kuantan, Malaysia -- Perhaps you are wondering how to bring Buddhist teachings to the inmates at Geha Bodhi. Very easy, that is by instilling the teachings of Buddhism in their day-to-day living and to make Buddhism a part of their life. 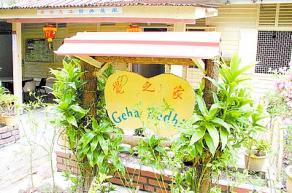 << Geha Bodhi is the first rehab centre in Malaysia founded on the principles of Buddhism.

Every day at seven in the morning and eight in the evening, all Geha Bodhi inmates will be draped in white and line up neatly at the main praying hall to offer their prayers to Buddha, including rituals such as burning the incense and kowtow.

Founder of Geha Bodhi Lin Jichang said although offering prayers to Buddha is what the inmates have to perform each day, the Buddhist group has never forced the inmates to memorise the scriptures. Instead, they are encouraged to apply what they have learned in their daily living.

"Other than teaching them how to remember the scriptures, the centre also makes an effort to arrange enlightenment classes for them to better understand the meanings of scriptures as well as the messages they are trying to deliver."

Besides reading the scriptures and attending enlightenment classes, Geha Bodhi also organises Buddhist documentary film shows to allow the students to gain wisdom through a variety of channels.

"We are very grateful to have Life Foundation sponsoring our Life TV, so that the inmates can understand the Buddhist teachings via TV programmes.

Of course, reading Buddhist literature and listening to Buddhist music have also been routine activities one may find at Geha Bodhi.

Lin Jichang will himself explain the teachings of Buddhism to the inmates, while Buddhist Masters are occasionally invited to enlighten the inmates. Besides, professional counsellors will also be invited to instill Buddhist teachings in them.

Geha Bodhi is the first rehabilitation centre in the country founded on the principles of Buddhism, and most of its curriculum has been compiled by Lin, Buddhist Masters and advisors. Under such circumstances, the curriculum is being continuously upgraded as it gets along, with the hope that it will eventually become a priced asset of the centre in the future with the experiences accumulated through the years.

"I personally knew nothing at the beginning, and had to start from scratch. I believe as long as the Buddhist teachings could be spread far and wide, the inmates should be able to more or less comprehend their meanings. In order to chant the scriptures, meditation classes have also be arranged."

Geha Bodhi teaches a total of forty different Buddhist scriptures, and some of them have been made into exam questions which the inmates have to pass in order to get promoted to higher grades.

"We emphasise that Geha Bodhi inmates must conform to the restriction rules within the centre.

"Our restrictions are not really that rigorous. We feel that as a rehabilitation centre and a transitional stop for former drug addicts, we must not make the rules too rigorous, or the inmates will be scared away, thus defeating our purpose of purging their souls."

The restriction rules and arrangements at Geha Bodhi are pretty flexible, as the inmates have all been used to the exciting and colourful life outside. They need some time to get accustomed to the quiet life inside the centre.

Lin Jinbao, the chief counsellor at the centre, used to be a drug addict for 34 years, and have been jailed 13 times for various offences.

Thanks to the opportunity of coming into contact with Buddhist teachings while in prison, he realised that Buddhism could really change the life of a person. So he joined Geha Bodhi instantly after serving his sentence.

Lin Jinbao began to get addicted to drug when he was only 19, and was hooked onto it for the following 34 years.

He has been jailed 13 times and sent to the government rehab centres twice and lock-ups over 20 times.

The most fortunate thing Lin has come across in his life was the opportunity to come into contact with Buddhist teachings when he was in prison.

"Buddha's teachings have given me tremendous peace. I used to be a very hot-tempered guy, and would never think about other people when I was trying to do something."

After learning Buddhism, he even practised it in his daily living and gradually, he was transformed by it.

"I feel I have changed a lot. It's Buddha's teachings that have opened my eyes."

Actually Lin Jinbao became a Buddhist way back in 1983, but he did so with a motive that by believing in Buddhism, he would be protected by Buddha even if he continued to take narcotics.

While he accepted Buddhism, he did not make the effort to learn more about Buddha's Way back then. And because of that, he continued to be drowned in the sea of drug.

Thanks to the reminder from a Master Tan later, he was shocked to find out how wrong his perceptions had been. So he joined Geha Bodhi two years ago and began as a learner and eventually became the chief counsellor in charge of all the chores at the centre.

"I'm very thankful that the Buddha's Way has touched my heart. If you were to ask me to wash the toilet, sweep the floor or clear the fallen leaves, I would tell you it was downright impossible. No one could tell me to do any of these."

But things are different now. Lin has gained a renewed insight into his own existence once again, and lives a respectful life.

Delivered out of the sea of drug

Lin Jinbao feels that if a person is not obstructed by any hindrances or agony, then he will be delivered from all the daydreams and live a practical life.

Lin Jinbao often shares his experiences with new inmates. He has even been invited by some organisations and schools to share his story, with the hope that what he has gone through in the past could serve as a lesson for others.

He emphasises that Buddha will not deliver those who are insincere. "The establishment of Geha Bodhi shows that Buddha has held out His hands to those in need. Buddha has opened up a way and a direction for all, and if we are still unrepentent, there is no way Buddha could deliver us out of our afflictions."

Although he still feels sorry for those who are still drowned in the sea of drug, he feels that perhaps it is not yet time for these people to receive the enlightenment from Buddha, and should therefore not be rushed into it.

He laments that all the 37 prisons and 29 rehab centres within the country have been packed to the seams, showing that crimes are indeed on the rise. As such he says it is essential for the authorities to inject religious elements into these institutions so that more inmates will be able to receive enlightenment.

"I used to be a drug addict, and am now growing old. I only hope to do something for drug addicts in the remaining years of my life to make up for my sins in the past."