Understanding Death and Beyond

Kuala Lumpur, Malaysia -- The much-awaited Closer-to-Reality Conference (C2RC) 2008 with its intriguing theme, “Understanding Death and Beyond”, was held at Thean Hou Temple from 27 to 29 December. It was organised by Sasanarakkha Buddhist Sanctuary (SBS) as an attempt to “connect real life experiences with Buddhist scriptural understanding”. 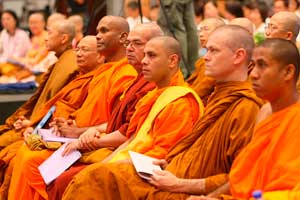 Death and what lies beyond has generated countless questions that has fascinated humanity throughout the ages, evoking diverse answers from great teachers and spiritual guides. Surely such an intriguing topic deserves a modern platform for clarification.

C2RC 2008 played this role by providing an opportunity for truth seekers, ­open-minded Buddhists and others­ to investigate, ponder, discuss and clarify.

In his keynote address, Ven Aggacitta, abbot of Sasanarakkha Buddhist Sanctuary, urged every one to remain objective and open-minded without being paralysed by the fact that most of the time our understanding of reality is tentative and open to new perspectives according to ever newer discoveries.

He cautioned that this conference might reveal new discoveries that could challenge our current understanding of reality and consequently require us to unlearn old ideas and relearn new facts. One should be open to undeniable possibilities and be comfortable with the tentative, dynamic nature of one’s understanding.

The conference adopted a multi-disciplinary approach through a series of presentations, video shows, discussions and forums in three stages:

The first stage dealt with “the phenomenon of existence beyond the gross physical body” by investigating OoBE (Out-of-Body Experience), NDE (Near-Death Experience), past life recall of people during regression hypnosis and children's spontaneous recall of past lives. Investigation into related paranormal phenomena followed, with a paper on the perceptions of psychics and another on the detection, by scientific means, of a form beyond the gross physical form.

Besides the presentation of research findings on the above by esteemed speakers competent in their respective fields, relevant documentary videos were also screened, followed by animated discussions and forums.

Stage two departed from the experiential and the empirical, moving through intellectual and academic terrain into interpretative mode, and probably left a good number of delegates behind. Here, experts in their respective traditions­, Early Buddhism, Orthodox Theravada, Chinese Mahayana Buddhism and Tibetan Bardo Teachings­ attempted to give interpretations of the issues arising from the findings.

For the Buddhist delegates who believe in the teaching of anatta (no-self), the most bewildering concern was how to regard this “phenomenon of existence beyond the gross physical body” which seemed to be so well-documented as to strongly suggest the existence of a ‘soul’. But this was by no means the only concern. There were also much animated discussions on other issues, such as:

The last stage of the conference saw Buddhologist Dr Max Deeg offering his critique on the presentations of the experts on Buddhism. He cautioned that the Buddha’s teachings were meant mainly for practitioners to achieve liberation and hence some unrelated or non-essential information such as OoBE and the like may not be explicitly mentioned in the scriptures.

Ven Aggacitta rounded off the conference by reiterating the ideals behind C2RC 2008 and how one could grow spiritually as a truth-seeker through objective enquiry, by unlearning and relearning. He recapitulated the salient points brought up by each speaker and summarised the lessons that could be learnt from the presentations of the experts on Buddhism­lessons that bring us closer to the reality of death. This could help prepare us to face death more skilfully, with a more informed mind.

Whether the conference actually inspired the delegates to ponder over their lifestyles in preparation for the hereafter, or to seriously question their purpose in life, remains to be known. Nonetheless, a healthy spirit of enquiry based on contemporary multi-disciplinary approaches that allow dogmatism to be challenged was certainly nurtured. In a way, one could say that C2RC 2008 walked the talk that the Buddha gave to the Kalamas.

----
If you missed this extremely interesting conference, don’t worry ­ you’ll now be able to download all 10 papers and more, including the keynote address, summary & conclusion and presentation slides from www.c2rc. org. These resources will be available FOC only until Sunday, 2 February 2009. If you want something closer to a ‘live’ experience, you can place your orders for the DVD of the conference through How Eng Keong (t. +6012 3852 886; f. +603 7781 0560; e. c2rc.how@gmail.com). The DVD, in a set of seven, will soon be available @ RM80 per set.