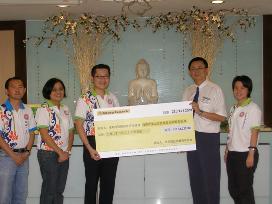 << Dr. Ong See Yew - President of Young Buddhist Association of Malaysia (third from the left)  hand over the mouk up cheque to Bro. Tan Chee Wei - the representative of Taiwan Buddhist Tzu Chi Foundation Malaysia (second from the right).

In order to ensure the funds collected will go directly to the victims concerned, YBAM has entrusted Taiwan Buddhist Tzu Chi Foundation Malaysia to be responsible for the reconstruction of the affected areas.  Therefore, YBAM holds a ceremony on 21/11/09 to hand over the funds to Tzu Chi, Malaysia Chapter.

According to Dr. Ong See Yew, President of YBAM, he was touched and thankful to the Buddhist community in Malaysia for their generous donation in the relief fund despite the challenging economic environment globally.

He also urge the public to pay attention to the global warming issues and to actively participate in all the environmental protection measures. He prayed that victims of all areas will be relieved soon and urge the Buddhist community to continue offer their spiritual support and blessings to the victims.

Names of all donors will be shown in the website of YBAM. For further details, please see www.ybam.org.my.