The walk of austerity 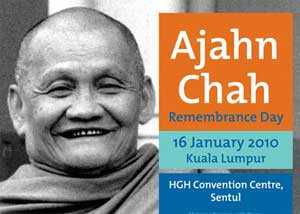 As its name implies, this school encourages spiritual seekers to renounce their worldly life and wander into the forest to meditate.

The forest was, after all, where Siddartha Gautama came into the world, gained enlightenment, preached and passed away.

Theravada literally means “Way of the Elders” and adheres strictly to the original teachings and monastic discipline laid down by the Buddha. Living frugally with few possessions means a peaceful, unburdened life, but of course, the lay community plays a part in the monk’s life by donating food and robes to gain merit and spiritual inspiration.

Enlightenment is attained through intense meditation, austerity and adherence to the 227 rules of conduct, but it need not necessarily be achieved in the forest. It can be achieved anywhere because location is secondary to dedication and perseverance.

According to Ajahn Chah, “The purpose of the Thai Forest Tradition is to seek and search inwardly until you reach the Original Mind also known as the Pure Mind. The Pure Mind is the mind without attachment.”

The speakers for Ajahn Chah Remembrance Day on Jan 16 include Ajahn Sumedho, Ajahn Nyanadhammo from Australia, abbot of Wat Pa Ratanawan in Thailand, Ajahn Cattamalo of Muttodaya Forest Monastery, Germany, Ajahn Chandako of Vimutti Hermitage, New Zealand and Ajahn Siripunnyo, a Malaysian-Thai born and educated in the UK and now abbot of Dtao Dam Hermitage near the Thai-Burmese border.