Head to Penang for Vesak Day while visiting Langkawi

Penang, Malaysia -- People who are staying in accommodation in Langkawi at the end of May could find that their visit to the island coincides with one of the biggest festivals in the Buddhist calendar. 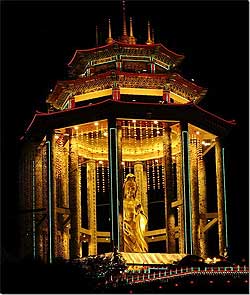 On May 28th, followers of the religion will celebrate Vesak Day, which marks the birth, enlightenment and death of the famous deity.

Those who are travelling to the islands on the west coast of Malaysia may decide that paying a visit to the Kek Lok Si temple on Penang is a good idea to fully appreciate the festivities.

Boasting some of the most spectacular celebrations throughout Malaysia, taking the ferry from Langkawi to Penang could be a good move for anyone interested in the religious event, according to World Events Guide.

Religious and prayer services, meditation sessions and sermons make up some of the day's activities, while the evenings are characterised by candlelit processions that lead back to the temples.

Another part of the festivities involves setting caged animals free on the steps of many of the country's temples. This includes doves, tortoises and frogs.

Vesak Day celebrations begin early though so anyone who wants to make the most of this Buddhist festival should ensure that they do not miss the dawn processions and services.