GEORGE TOWN, Penang (Malaysa) -- A group of 40 Buddhist monks and novitiates displayed their spirit of giving and sharing by distributing food and provisions to elderly residents at Little Sisters of the Poor, Home for the Aged. 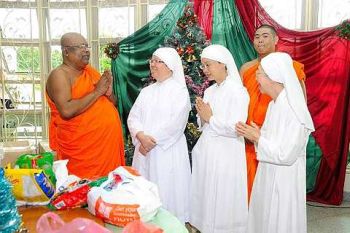 The group was received by the home’s Mother Charlotte, Sister Joanna and Sister Lucy.

Ven Indaratana said Malaysians should help one another irrespective of race or religion.

“We hope our visit will help foster greater understanding and friendship among the people of different faiths,” he said.

The group brought fruits, rice, bread, biscuits, medicine and toiletries which were donated by devotees of the temple in Jalan Kampar in conjunction with its Seventh Novitiate Programme aimed at providing Buddhists the opportunity to experience life as a monk.

This year’s theme for the programme is “Leading Life Towards a Brighter Path.”