New Buddhist monastery to be built in Woodlands

SINGAPORE -- A new Buddhist monastery is set to be built in Woodlands, with construction expected to be completed by the end of next year. It will be located at the junction of Woodlands Drive 16 and Woodlands Avenue 6. 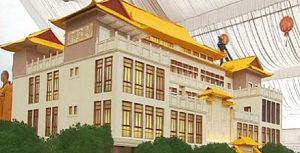 << Construction of the five-storey complex is expected to be completed by the end of next year.

The five-storey complex, which is run by Buddhist group BW Monastery, will also house a restaurant, medical clinic and a library, and sits on a site about half the size of a football field.

A groundbreaking ceremony was held on Tuesday (Apr 7) at the site and was attended by National Development Minister Khaw Boon Wan.

The Buddhist group said the new monastery is part of its expansion plans to support its growing membership, which has risen to 3,500 today. It currently houses its headquarters at the Citiraya Centre in Lorong 27, Geylang.

With the new facility, BW Monastery expects to grow its membership to around 5,000.