SINGAPORE -- Venerable Ming Yi, who donated his kidney to a stranger last week, said he was inspired to do so by a TV news report about kidney patients here. 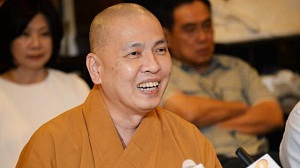 << In a press conference on Tuesday - the first since his release from prison in September 2010 - Venerable Ming Yi also broke his silence on how he has been coping in the past few years. -- PHOTO: SHIN MIN

He decided to support the cause and contacted the hospitals within days of coming across the report, according to Shin Min Daily News.

At a press conference on Tuesday - the first since his release from prison in September 2010 - the 53-year-old also broke his silence on how he has been coping in the past few years.

He served four months in jail in 2010 for misappropriation of funds and falsifying accounts at Ren Ci Hospital. He has kept a low profile until last week when it was reported that he had donated his kidney to a stranger.

At the press conference, Ven Ming Yi, who appeared to be in good spirits and has put on weight since his last public appearance, confirmed that he donated his left kidney on April 27 to a young woman, who has not been named. She is recovering well, he said.

The Buddhist monk, who was discharged from the hospital on April 30, said he was doing well. In fact, he could walk on his own the day after the operation.

"The doctors asked if I needed stronger painkillers. But I didn't feel any pain at all," he said at the conference at Foo Hai Chan Monastery where he is abbot.

Ven Ming Yi revealed that he had initial doubts about his decision. But he was determined to go ahead after learning that donating a kidney would not affect his health.

"The tests were very rigorous, and gave me confidence in the organ donation process in Singapore," he told reporters in Mandarin.

Many people have expressed their support for his act of kindness, and he felt encouraged, he added.

When asked about his 2010 jail term, he said that it did not matter whether he was known as "venerable", by his birth name Goh Kah Heng, or if he was known as a former convict.

"They are just empty names," he said. "We have to keep moving forward and not dwell on the past."