Thousands turn up at temple for rituals ahead of Vesak Day

Singapore -- More than 20,000 people turned up at Kong Meng San Phor Kark See Monastery to perform rituals in reverence of Buddha - the founder of Buddhism - yesterday on the eve of Vesak Day. 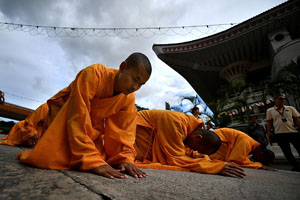 << Rite of repentance to mark Vesak Day: Monks carrying out the "three steps, one bow" rite - walking three steps barefooted before prostrating - done in repentance and reverence of Buddha, at the Kong Meng San Phor Kark See Monastery in Bishan yesterday. Buddhists mark Vesak Day today. It commemorates the birth, enlightenment and death of Buddha, the founder of Buddhism. This year, the monastery is celebrating Vesak Day for a month with the theme, Season of Gratitude, and the festivities include a Vesak Fair. ST PHOTO: ARIFFIN JAMAR

This year, the monastery located in Bright Hill Road is marking Vesak Day for a month with the theme of "Season of Gratitude".

Vesak Day marks the birth, enlightenment and death of Buddha, and is celebrated by Buddhists worldwide.

The festivities at the monastery include a Vesak Fair and iconic rituals such as the "three steps, one bow" rite and the Bathing of Prince Siddhartha ceremony.

The "three steps, one bow" rite is a long procession done in repentance and reverence of Buddha. It started at around 5pm yesterday and ended early this morning.

Adherents performing it take three barefoot steps and then prostrate, repeating the process around the perimeter of the temple for 2-1/2 hours each time. Groups of adherents take turns performing the procession through the night.
TOP