SINGAPORE -- As a young boy in the 60s, Mr Lim Keng Boon would accompany his parents, who are devout Buddhists, to the Wat Ananda Metyarama Thai Buddhist Temple in Jalan Bukit Merah for prayers. 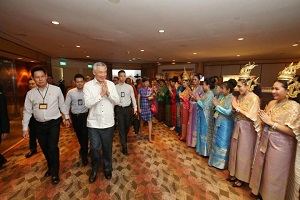 Mr Lim, now 64 and retired, would go on to dedicate 54 years of his life volunteering and organising events for the temple.

The journey through time was on Mr Lim's mind at a 100th anniversary celebration lunch for the temple on Sunday (May 13), where he received an award for his long service from Prime Minister Lee Hsien Loong.

"When I started going to the temple, it was a simple place surrounded by attap huts. It is now very modern and impressive," said Mr Lim, who previously worked in a travel agency.

Founded in 1918 by Venerable Luang Phor Hong Dhammaratano and completed in 1923, the Wat Ananda Metyarama is the oldest Thai Buddhist temple in Singapore and plays a pivotal role in the history of the religion as the first temple recognised by Thai royalty outside of Thailand.

Around 1,500 people turned up for the three-hour long celebration, including Minister in the Prime Minister's Office and Second Minister for Finance, Education and Law Indranee Rajah. Ms Indranee is also MP for Tanjong Pagar GRC, where the temple and columbarium is situated.

Also present was a delegation of 634 Buddhist monks from Asia, Europe and America, who are meeting in Singapore as part of the anniversary celebration and for a monks' conference, Venerable Chao Khun Rian told the Straits Times.

"The temple is older than (the nation) of Singapore, so it is a big milestone for us to celebrate this occasion. I'm very proud," said the temple's honorary secretary.

Over the past century, the temple has sought to keep up with the times.

In 2014, it completed a $6 million five-storey extension, which now houses its cultural centre and shrine. Designed by Czarl Architects, the distinctive V-shaped building is meant to attract a younger crowd and was shortlisted for several architectural awards.

This year, the temple also completed its 100th year anniversary pavilion, featuring a rose quartz statue of the deity Guanyin.

Asked if the Thai Buddhist temple has remained relevant to the youth, Mr Lim said he believes so, as most of the 200-odd volunteers are young, while he is the eldest. "We also have programmes and a youth circle for the younger folk," he added.

The Wat Ananda Youth, which was established in 1966, is the first Buddhist youth circle here. Many devotees and volunteers also come from the Thai community residing in Singapore, he said.

The temple also gives back to the youth community - it donated some $100,000 in scholarships to 10 primary and secondary schools at the lunch, with Ms Indranee handing out the cheques to the various schools. Another 20 wheelchairs were donated to the Kwong Wai Shiu Hospital.
TOP