Singapore -- Dental experts have raised doubts over the authenticity of a purported Buddha's tooth in a Singapore temple, claiming it could not have come from any human being, The Sunday Times reported. 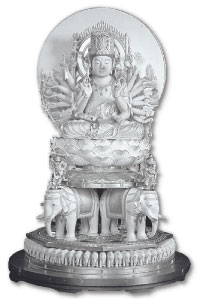 More than 60,000 donors poured 45 million Singapore dollars (29 million US dollars) and 27 kilograms of gold into the four-storey building where the tooth, said to be one of Buddha's molars, is kept in a 3.6-metre-high stupa made of gold.

"There is absolutely no possibility that it is a human tooth," Dr Pamela Craig, a senior lecturer at the University of Melbourne's school of dental science, was quoted as saying.

After examining photographs, Craig said it probably came from a cow or water buffalo.

Human teeth should be rounded with a short crown and a comparatively longer root, but the picture clearly shows a long crown and a shorter root, she noted.

"Looking at a photo is clear enough, because it's so obvious that it's not a human tooth," she said. "It's like comparing a pear and an apple."

Four other dentists, including two forensic dental experts, said the tooth could not have come from a human.

"This is an animal cheek tooth - that is, a molar at the back of the mouth," Professor David Whittaker at Cardiff University in Britain told the newspaper.

The Buddha Tooth Relic Temple in Singapore's Chinatown said that the tooth was discovered by a monk in 1980 in Myanmar (Burma). He gave it to Venerable Shi Fazhao, the temple's abbot, in 2002.

The public is allowed to see the tooth twice a year, on Buddha's birthday and the first day of the Chinese New Year.

"To me, it has always been real, and I have never questioned its authenticity," Venerable Shi Fazhao told the newspaper.

As for the assessments of the dental experts, he said: "I don't care what they say. If you believe it's real, then it's real."

The temple dismissed the suggestion of conducting DNA tests on its relic.

"It is unlikely that any Buddhist temple or its devotees will agree to subject any sacred Buddha tooth or relic to such a test," the temple said in a statement.