SINGAPORE -- The French and British representatives of the ASEAN-EU Summit visited the Burmese Buddhist Temple off Balestier Road on Thursday afternoon. 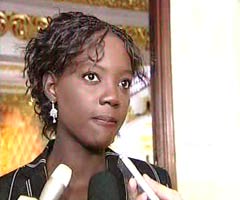 The visit was aimed at showing their support for the Myanmarese people and to understand the temple's activities.

The VIP visitors also met the monks at the Burmese Buddhist Temple for a short closed-door meeting.

Meg Munn, British Foreign Office Minister, said: "Their strong message to us was that the religion of Buddhism is a peaceful religion. It's one where they are not looking for agitation. They are just looking for respect for human rights and they want to see everybody live in peace in Burma."

The monks were also told that UN Special Envoy Dr Ibrahim Gambari is the best solution for national reconciliation in Myanmar and that EU sanctions against the country are meant to hurt the military government, not the people.

Rama Yade, French Minister of State, Foreign Affairs, said: "It is important to build a front to not only punish (the government), but also sustain, support and help the Burmese people. We would not want the Burmese people to suffer from the sanctions."

Despite the political situation in Myanmar, temple officials said they would concentrate on prayers and charity work.

David Lim, President of the Burmese Buddhist Temple, said: "We don't encourage any political activities in this temple, but of course, we welcome anybody to visit this temple for a good cause, for prayer, for donations to charity."