Research centre on Buddhism in Singapore

Singapore -- SCHOLARS of Buddhism will find themselves in good company next year. The Institute of South East Asian Studies (Iseas) on Wednesday received $1 million from the Singapore Buddhist Lodge to set up a research centre to study the religion. 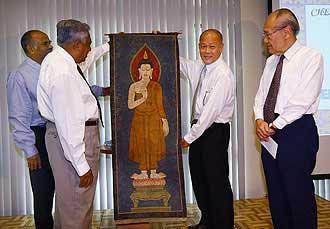 << The Institute of South East Asian Studies (Iseas) on Wednesday received $1 million from the Singapore Buddhist Lodge to set up a research centre to study the religion. - PHOTO:ZAOBAO

The centre, the first of its kind in Singapore, is expected to broaden the research of Buddhism in Asia, by recruiting overseas academics, organising seminars, and beefing up the institute's collection of Buddhism-related texts.

Iseas director K Kesavapany said the need to 'get back to the essence' of religion is relevant in today's examples of religious extremism.

'Just look at what happened in Mumbai,' he said. 'Buddhism, with its message of peace, tolerance, harmony and unity, is one bulwark against such divisiveness.'

Similar centres for Singapore's other religions might be set up, too, added Mr Kesavapany, but he declined to say when.

The man in charge of the new centre is Dr Tansen Sen, a New York-based professor who will relocate to Singapore for the job. Dr Sen is well-regarded for his research in Buddhism in the United States, China, Japan and India, and has penned several books and articles about the religion and its influence on Asian societies.

In addition to selecting books for the institute's public library and editing research documents, Dr Sen is also expected to lead a three-day conference in February that will bring together over 40 Buddhism scholars from around the world.

The conference, which will cost Iseas an estimated $300,000, is closed to the public, but Mr Lee Bock Guan, chairman of the Singapore Buddhist Lodge, says it will open the door for a more meaningful, international dialogue about the 2,500-year-old religion.

'How Buddhism affects other countries, and what devotees in other societies are doing to cultivate its understanding - that is a wonderful opportunity for us to learn,' said Mr Lee in Mandarin.