SINGAPORE -- The founder and former head of Ren Ci, Ming Yi, broke down in court on Tuesday as he recounted the struggles he faced in setting up the hospital. 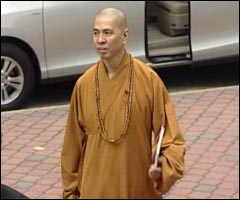 The 47-year-old is accused of giving S$50,000 to his former aide Raymond Yeung, a Singapore Permanent Resident.

Ming Yi had allegedly conspired with 34-year-old Yeung to cover up the unauthorised loan by making it look as if Ren Ci used the money to buy two statues and some wood from an artefacts firm called Mandala Buddhist Cultural Centre.

It was clearly an emotional day for Ming Yi as he recounted his dream to help as many people as he can.

Testifying in his own defence, the monk was overcome with emotions as he spoke of his parents' initial disapproval of monkhood. He also recalled the many setbacks he suffered in the early days of managing Foo Hai Ch'an Monastery.

When he spoke of his benefactor, the late Venerable Siong Khye who was a president at the Singapore Buddhist Federation, Ming Yi broke down.

Trying hard to hold back his tears, Ming Yi revealed that it was Venerable Siong Khye who sparked the determination in him to set up a hospital for the chronically ill.

It was to fulfil his wishes that Ming Yi went on to take over the Chronic Sick Unit at the old Woodbridge Hospital, despite his acquaintances telling him he would not succeed.

It was clear from Ming Yi's evidence that he had no prior experience in corporate governance nor the running of a hospital.

The court was told that for a substantial number of years, Ren Ci lacked funding constantly and Ming Yi was under tremendous pressure to improve the hospital's finances.

It was in their desperation for funding that the Management Committee ventured into businesses. That was how artefacts firm Mandala came about. But the ventures did not help much.

In fact, Ren Ci loaned money to quite a few of its related entities. They included Mandala, Bodhicherrie Singapore as well as Foo Hai Ch'an.

Ranging from S$300,000 to more than S$1.3 million, the loans were categorised in Ren Ci's books as "Advances to Chairman".

Ming Yi told the court that he was solely responsible for all these loans and that the committee approved of them. But this soon changed when a board member raised his doubts. Such loans were later categorised as "Other receivables" from the year 2000.