Singapore -- IN 1998, FORMER Ren Ci CEO Ming Yi bought properties and assets in Perth, Australia, including a plot of land - where a house was built later - a BMW car, a country club membership and a horse. 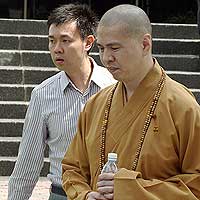 << Ming Yi had bought assets such as a bungalow, a BMW car, a horse and a country club membership in Australia. He is seen here with co-accused Raymond Yeung. -- ST PHOTO: WONG KWAI CHOW

Over the last 20 years, the Buddhist monk has bought and sold at least seven properties, spending millions of dollars altogether. Some of these properties were to house religious causes, while others appeared to have been bought for investments or for Ming Yi's own use.

On Friday, in his trial for falsifying documentation and misappropriation, the prosecution produced evidence of these purchases to show that some assets were bought even as the charity hospital he founded in 1994 was struggling to find funding.

The trial centres on a $50,000 loan made out in 2004 to Ming Yi's former aide, Raymond Yeung, which the prosecution argues was improper and unlawful. Ming Yi, 47, faces four charges while Yeung, 34, is also accused in two of them.

The court heard that Ming Yi's first property was in Mountbatten Road, bought in the late 1980s, which he used as the site of Chao Yin Lodge, a Buddhist charity that he ran. A devotee helped with the downpayment and others chipped in for the instalments, but Ming Yi was the registered owner. The property was sold in 1994 and the proceeds used to buy a two-storey semi-detached house worth $1.48 million in Bedok Ria Crescent, as the new site of the lodge. A year later, Ming Yi also purchased a $1.38 million condominium in Meyer Road.

In July 1998, the monk and a former Ren Ci treasurer, Mr Wee Beng Seng, bought a piece of land in Perth, Australia, on which they later built a house. They sold it in 2002. Ming Yi also bought a BMW and country club membership in Australia. Another purchase was a show horse, which he sold subsequently when he found out that the trainer was using it for racing.

Some time in 2002, the monk also bought a two-storey bungalow in Melbourne with Yeung, which they sold two years later for a penthouse in the same area. The two owned other BMWs, which were gifts from an elderly monk, there.

The extravagance did not sit well with the prosecution. In earlier testimony, Ming Yi had told the court, sometimes tearfully, that Ren Ci had struggled to stay afloat in the early years. He was reminded of this on Friday by Deputy Public Prosecutor Jaswant Singh, who accused him of building up a property empire. The DPP asked: 'All this while, Ren Ci was floundering and you did not sell your properties to help Ren Ci?'

Ming Yi said he had thought about it, but knew he would be saddled with the outstanding bank loans. 'I do admit, I am not one good person who knows how to manage property because I borrow money from the banks but use the money for other things so the loans just go on,' he said. The monk admitted that he was 'easy with money' but denied he was similarly so with Ren Ci's money. Admitting he had his flaws, he noted: 'But that does not mean that I am not taking good care of Ren Ci and Foo Hai Chan Monastery.'