Singapore -- THE trial of Buddhist monk Ming Yi for misappropriation continued on Tuesday with the prosecution attempting to catch him out in court for lying. 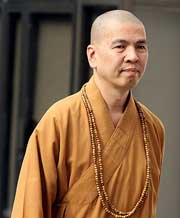 << Ming Yi said he was 'very worried' when he learnt about the missing sums being queried by the Health Ministry (MOH). -- ST PHOTO: WONG KWAI CHOW

One bone of contention was two amounts missing from Ren Ci's books when they were seized by the auditors in 2006, amounting to $50,000 and $300,000. The former was a loan made to Ming Yi's ex-personal aide, Raymond Yeung, which he used to pay for an apartment in Hong Kong. Yeung is also on trial. The other amount was later accounted for.

In court on Tuesday, Ming Yi said he was 'very worried' when he learnt about the missing sums being queried by the auditors appointed by the Health Ministry (MOH).

He claimed that though he felt responsible for making good the money, he had Yeung cough up the funds for the $50,000 loan first, because he himself did not have enough to repay the debt. Yeung had to borrow more money to repay the loan.

That account by the 47-year-old former chief of Ren Ci Hospital was a lie, said Deputy Public Prosecutor Jaswant Singh. In May 2006, Ming Yi had more than $570,000 in his private bank account and over $360,000 the next year.

'You were so anxious to pay back the money and had half a million dollars in your account when MOH came looking. You could have repaid off the $300,000 and $50,000,' the DPP said.

In response, the monk argued that a large part of the $570,000 was not his own money, but a donation from a devotee to the Singapore Buddhist Free Clinic (SBFC). 'DPP, whatever people ask me to donate to the SBFC, I cannot be using that to offset the loans,' Ming Yi retorted.

The $360,000 came from shares he had sold in a company called Semco Design Communications, in which he was a director. He had borrowed $273,000 from Ren Ci in 1997 to invest in it. But the prosecutor continued to press his case that the monk would try to explain any conflicting evidence away, and that his story about not having enough to pay off the loan was a 'charade'.

Ming Yi also claimed he was under the impression that the $50,000 loaned to Yeung was to pay for rare wood for a Ren Ci-linked artefact shop, the Mandala Buddhist Cultural Centre. He claimed not to have been told the truth until some time in January last year.

But the state maintains that Ming Yi had known all along what the loan was for and that it was improper because Yeung was not even a Ren Ci employee when he borrowed the money. There was never any intention to repay it if not for the Ernst & Young inquiry into the missing money, said DPP Singh.