Leader of independent church apologises to Buddhists and Taoists

Singapore -- The Government called up a Christian church leader yesterday after receiving complaints about online video clips that show him making insensitive comments about Buddhism. 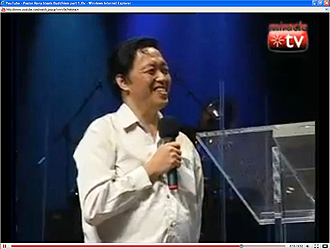 << The video clips, which first appeared on the church's website two weeks ago, showed Pastor Tan questioning two church members as they recounted their past experiences as Buddhists. -- PHOTO: YOUTUBE

The Internal Security Department yesterday met Senior Pastor Rony Tan, founder of the Lighthouse Evangelism independent church, and told him that what he did was wrong. Last night, he posted an apology on the church’s website, promising to respect other faiths and ‘not ridicule them in any way, shape or fashion’.

The video clips, which first appeared on the church’s website two weeks ago, showed Pastor Tan questioning two church members as they recounted their past experiences as Buddhists. In the exchanges, some of Pastor Tan’s comments – on Buddhist precepts of rebirth, karma and nirvana – drew laughter from his audience. [Correction: Rebirth, Karma and Nirvana are not precepts but some of the central tenets of Buddhism.]

The Ministry of Home Affairs said last night that his comments were ‘highly inappropriate and unacceptable as they trivialised and insulted the beliefs of Buddhists and Taoists’. It said the ISD told him that in preaching or spreading his faith, “he must not run down other religions, and must be mindful of the sensitivities of other religions”. Singapore’s Maintenance of Religious Harmony Act makes it unlawful for a person to make insensitive comments about other religions.

In his apology last night, the pastor did not refer to being at the ISD. Instead, he said he had received e-mail messages from people who had been “saddened and hurt” by what he said, and realised that his presentation and comments were wrong and offensive. “So I sincerely apologise for my insensitivity towards the Buddhists and Taoists, and solemnly promise that it will never happen again,” he said.

Although the video clips are no longer on the church’s website, netizens have reposted them on other forums. Two short clips show Pastor Tan asking church member Joseph Wee about the time he was a Buddhist in the 1980s, including a short stint as a monk. Mr Wee described chanting words he did not understand, and his frustration at not getting answers to his questions about attaining nirvana – the Buddhist state of enlightenment. Pastor Tan drew laughter from his audience with his remarks on the chanting, and compared Mr Wee’s effort to seek answers from his mentors as “the blind leading the blind”.

In a third video clip, a woman claimed she could recite an ancient Buddhist chant even though she had never heard it. Pastor Tan suggested that words were put into her mind by “demons”. The video clips, carrying the church’s “Miracle TV” logo, first appeared on the online forum HardwareZone on Feb 3. By last night, the forum thread had chalked up nearly 1,600 comments and more than 63,000 page views. On YouTube, the three videos have garnered about 4,000 views each. Many viewers who left comments felt that Pastor Tan’s comments about Buddhism were insensitive and unfair.

Lighthouse Evangelism has branches in Tampines and Woodlands, and describes itself as a “megachurch”. It has more than 12,000 members and is not affiliated with the National Council of Churches of Singapore. The church was founded in 1978 by Pastor Tan, who in his online autobiography, said he was born into a Taoist family. His son Pacer is the church’s youth pastor, while his daughter Tracy leads the church’s drama ministry.

Buddhist and Taoist groups who had received complaints said last night that while it was good the authorities intervened, more should be done to ensure that such incidents did not recur. Venerable Kwang Phing, secretary-general of the Singapore Buddhist Federation said, “We put in so much work to maintain religious harmony in Singapore; it takes only one or two persons to jeopardise that process.”

In is apology, Pastor Tan urged netizens who have been circulating the videos to stop doing so. He said also that he wanted to tell his followers “not only to to continue to love souls, but also to respect other beliefs and not to ridicule them in any way, shape or fashion.” He added: “Let’s put our goal to build a harmonious Singapore a top priority.”