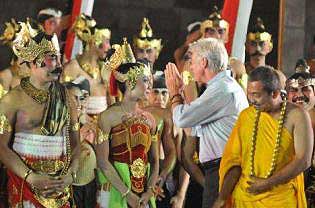 << US actor Richard Gere greets Indonesian performers after watching a traditional dance at the Borobudur temple in Magelang in Central Java province on June 26, 2011. (AFP Photo)

Gere, a Buddhist activist, comes to Indonesia fresh from a tour of South Korean temples and is set to take part in a procession and meditation at the Mahayana Buddhist monument.

“I’m happy and amazed to be here,” he said at a press conference at Magelang’s Manohara Hotel. “It’s not just an ordinary journey for me but also a spiritual journey.”

He said his arrival at Borobudur was “karma,” a term for the force generated by a person’s actions which affects future ones.

Gere said he was particularly interested in coming back to make a movie about the discovery of Borobudur in 1814 by Sir Stamford Raffles.

“I won’t make a film like the kind that Julia Roberts made in Bali,” he said, referring to the hit “Eat Pray Love”

“I want to make a film about the history of this temple. I really want to do this.”

Gere had been scheduled to visit the nearby Hindu temple complex of Prambanan, but the plan was scrapped after his flight to Yogyakarta’s Adisucipto Airport was delayed.

“We had prepared a welcome drink for him and his family,” he said. “We also planned to present them with flowers from Prambanan.”

Purnomo Siswo Prasetyo, Borobudur’s management director, said Gere’s visit was nonetheless expected to boost tourism in the area, home to several other Buddhist and Hindu temples and the ancestral seat of Javanese culture.

Before flying to Yogyakarta with his wife, Carey Lowell, and son, Homer James Jigme Gere, Gere was in Jakarta to meet with President Susilo Bambang Yudhoyono and Jero Wacik, the culture and tourism minister.

Gere will stay in Magelang and fly out on Tuesday for a family vacation in Bali.

Jero said his visit would be invaluable in raising the profile of the temple, after it had to be closed off for an extended period last year due to ash from the erupting Mount Merapi nearby.

“We were looking for an international figure who could relate closely to Borobudur, and that figure is Richard Gere,” he said, adding that the actor had previously expressed an interest in visiting the monument.

“He’s now become Indonesia’s informal tourism ambassador, for which he’s not being paid at all,” the official added.