Borobudur Planned to be Mecca for Buddhists

Jakarta, Indonesia -- Coordinating Maritime Affairs Minister Rizal Ramli said that he would make the Borobudur Temple in Magelang, Central Java, to become the main tour destination for Buddhists from around the world. 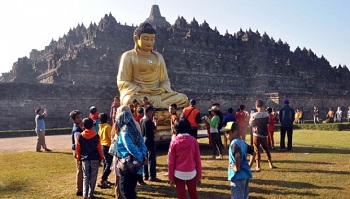 “We want Borobudur to become the Mecca for Buddhists. Just like Muslims, they always want to go on hajj pilgrimage before they die,” Rizal said when opening an event called Tribute to Batik in Jakarta on Saturday, October 3, 2015.

Rizal, who was the former coordinating economic minister during President Abdurrahman Wahid’s era, claimed that the Borobudur temple was more beautiful than the Angkor Vat in Cambodia. Therefore, Rizal said that the Borobudur Temple must become a religious tour destination for Buddhists.

“If Christians want to go to Jerusalem before they die, just like Muslims who want to go to Mecca, Buddhists must go to Borobudur,” he added.

Rizal also called for efforts to improve tourist destinations in other areas, such as the Toba Lake in North Sumatera, Labuan Bajo in East Nusa Tenggara, and Thousand Islands in Jakarta. According to Rizal, Indonesia should no longer count on Bali.

“Bali has been oversold. We need to develop new tourist destinations, and we have planned to develop ten new locations,” he said.

Rizal believes that the development of those tourist destinations would be important to achieve 20 million foreign visits per year within the next five years. Currently, the number of foreign tourists visiting Indonesia has reached 10 million people per year.