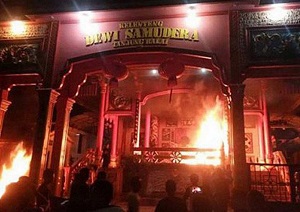 A spokeswoman for North Sumatra provincial police said the seven had led a mob that damaged at least three temples and other property in the town of Tanjung Balai, near Indonesia's fourth-biggest city, Medan. No one was injured.

Indonesia is a Muslim-majority nation but has a sizable ethnic Chinese minority, many of whom are Buddhist. The country has a history of anti-Chinese violence, most recently in the late 1990s amid the political and economic crisis that brought down Suharto.

But police officials denied Friday's attack was aimed at the Chinese community.

"This was just a [dispute between] individuals," said North Sumatra Police spokeswoman Rina Sari Ginting, adding that the situation was now under control.

Indonesia, where the majority of the population practises a moderate form of Islam, sees sporadic attacks on religious minorities by Muslim hardliners but authorities are quick to crack down on any violent incidents.

Hundreds of security personnel were deployed late last year when a Muslim mob burned down a number of churches in conservative Aceh province, saying they didn't have the right building permits.
TOP