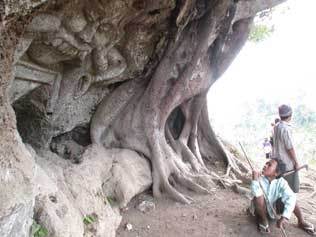 The sprawling cave - a reminder of the rich Buddhist past in the world's most populous Muslim nation - was discovered more than two decades ago near Jireg village in East Java province.

But it had never been thoroughly explored because of its remote and difficult-to-reach location, said Dhamma Subho Mahathera of Shangha Theravada Indonesia — the country's largest Buddhist organization — who visited the site on Aug. 12.

"As far as I know it is the only Buddhist cave in the world for meditation of Buddhist priests," Mahathera said. "There are reliefs representing four levels of meditations, from Sutatana to Arahata."

The sculptures include depictions of an elephant, cow, monkey, and a lotus — Buddhism's symbol of peace.

Indonesia also has the Borobudur temple complex in Central Java built more than 1,100 years ago — three centuries before the arrival of Islam — as a shrine to Buddha and a place for pilgrimages. It was declared a World Heritage Site by UNESCO in the 1980s.

Mahathera said Buddhist caves have also been discovered in India and Sri Lanka, but those did not have reliefs depicting the stages of Buddhist meditation.

Gautama Siddhartha was born in southwestern Nepal around 500 B.C. and later became revered as the Buddha.

Buddhism teaches that right thinking and self-control through meditation can enable people to achieve nirvana — a divine state of peace and release from desire. Buddhism has about 325 million followers, mostly in Asia.