Borobudur, Indonesia -- The year is 1815. A doughty young Englishman picks his way through jungle scrub behind his guide. He stands suddenly agog. Before him looms the object of his 22-day journey. 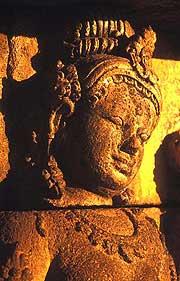 << Timeless ... a relief sculpture on the eastern wall at Borobudur.
Photo: Tom Cockrem

A large pyramidal hill - crowned by a stupa - is clad in its entirety by terraces of stone. These are swathed in thick shrubbery and trees, through which scores of seated Buddha figures gaze out across the surrounding Kedu plains. Its size alone denotes the site a true wonder of antiquity, which further explorations indubitably confirm. The place is central Java. The English adventurer is Thomas Stamford Raffles, lieutenant-governor of Java at the time.

The structure is Borobudur. It is in fact the greatest Buddhist monument the world has seen. Such is its splendour, Raffles concludes it must have been the work of visitors from India; it could not have been built by Indonesians. But we now know that it was, more than 1000 years ago.

Today it is best to arrive at Borobudur at dawn. The rising sun silhouettes the conical Merapi volcano to the west, then strikes the site's eastern aspect. This is its main entrance. Mount Merapi is one of the most active and volatile volcanoes in the world. Ash from one of its many eruptions is thought to have covered the temple less than 100 years after it was built - possibly the reason for its sudden and complete abandonment.

Freed now of all foliage, the terraces bask grandly in the golden morning light. The seated Buddhas in the walls are thought to represent ascetics meditating in remote high mountain caves. The first four terrace walls are showcases for bas-relief sculptures. These are exquisite, considered to be the most elegant and graceful in the ancient Buddhist world. They are laid out in galleries divided into panels. Each panel is an episode in the life of the historic Buddha, or of a bodhisattva (future Buddha).

This is what makes Borobudur unique. It is designed not as a conventional temple but as a gigantic instrument of instruction. Pilgrims would come here in a quest to find the pathway to enlightenment. Each of the terraces is indeed such a pathway, with an inner wall and outer balustrade.

And it is not just the terraces that are the preserve of fabulous carved imagery. Borobudur's gateways are also intricately carved and are the habitat of some fearsome-looking creatures. Jawless monsters, or kala, ward off evil spirits from the arched tops of the gateways; the ubiquitous makara do likewise, with their elephant trunk and gaping parrot's beak.

We latter-day pilgrims approach Borobudur as we are meant to from the west, with smoking Merapi at our backs. Time constraints dictate a more cursory examination of the splendours laid before us. Every carving is a masterwork - expressive, whimsical, fluent and alive. We journey with the blessed into deep mystical forests, celestial palaces and on boats across tempestuous seas. We encounter elephants, monkeys and mythical winged creatures as we go; and meet kings and queens, hermits, wise men, beggars and thieves.

As we move up to the higher terraces, the exuberant pictorials gradually give way to more contemplative scenes, which challenge the pilgrim with abstractions. To achieve level five means to have already left the carnal world behind.

Borobudur is structured in a strict symmetry. The four lower levels are perfect squares. Each aspect has the same centrally located sets of steps. These all but converge at the top. The design would seem to simulate a mandala, or geometric representation of the Buddhist cosmology.

There is considerable evidence - including copper nails - of a large complex of important wooden buildings once surrounding the monument. These may have included courtly buildings and even the king's palace.

Java's economy had long thrived on the proceeds of an extremely lucrative spice trade.

The dominant dynasty through the eighth and ninth centuries was the Sailendra, or "Rulers of the Mountain", and it was they who built Borobudur.

Such a glorious structure was doubtless seen as testimony to the level of wealth and artistry achieved within their realm. It is our misfortune that the Sailendra left no stone inscriptions or non-perishable texts.

That Borobudur has survived intact seems a miracle in itself. Construction is thought to have begun around AD780 and was completed about 70 years later. The structure's entire northern side is known to have collapsed on completion and had to be rebuilt.

A retaining wall was consequently built around the base, and one entire gallery wall was deliberately buried. A portion of this has now been uncovered. Borobudur was abandoned only 80 years after its completion - around AD920. Henceforth it was lost to volcanic ash and jungle, and remained that way until - Raffles turned up.

It was the accumulation of soil and foliage - which Raffles cleared away - that had helped preserve the structure. Removal of this left the stonework and substructure exposed to the district's steaming sun and drenching rains. By the early 20th century, the terraces had dramatically subsided and the carvings were beginning to erode. A hasty rescue operation in 1907 saved it just in time.

A much more thorough restoration program was undertaken by the United Nations Educational, Scientific and Cultural Organisation between 1971 and 1983. More than a million stones were removed, cleaned, treated and replaced, with a drainage system installed. All of this means Borobudur today is more structurally sound than it was at the time of its construction. It is now hoped it will stand for yet another 1000 years. And when you visit this true wonder of antiquity today, breathlessly absorbing its multifarious splendours, you find yourself believing it will.

Getting there Garuda Indonesia flies from Sydney to Denpasar five times a week. Phone 1300 365 331; see www.garuda-indonesia.com.

Staying there Accor Hotel group has a range of properties in both Bali and Yogyakarta. Brands include All Seasons, Mercure and Grand Mercure, Novotel and Sofitel. See www.balionanybudget.com.au.

More information Most hotels in Yogyakarta can arrange early morning excursions to Borobudur. Worth reading before you go is Borobudur - Golden Tales Of The Buddhas by John Miksic (Periplus), which includes the history and archaeology of the site.