Indonesian temple a reminder of country's Buddhist past

BOROBUDUR, Indonesia -- The Buddhist temple of Borobudur, set among volcanoes on Indonesia's Java island, stands as a testament to the Buddhist roots of the world's most populous Muslim country. 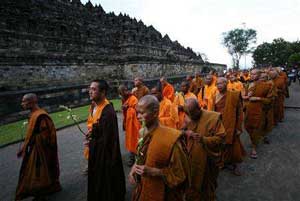 << Buddhist monks walk through Borobudur temple during a ceremony on Vesak Day in Magelang of the Indonesian Central Java province May 20, 2008

The temple, the world's largest Buddhist monument, was built in the eighth and ninth centuries. It is a pilgrimage site for followers from around the region and it is also the most popular tourist attraction in Indonesia.

This week, pilgrims came in their thousands to celebrate Buddha's birthday. Monks, nuns and devotees, dressed in yellow, saffron, grey and black robes, prayed and circled the grey, volcanic stone temple, which is decorated with reliefs showing scenes from Buddhist texts and from the life of Buddha.

Each year an estimated 40,000 to 60,000 worshippers from Indonesia, China, Taiwan, Singapore and elsewhere gather at Borobudur to celebrate Vesak, boosting local tourism in a country that often struggles to attract more visitors.

"This is the biggest Buddhist temple in Indonesia, so we have come to pray, for Buddha's birthday and enlightenment," said Inge Teja, a 27-year-old ethnic Chinese accountant who had come with about 180 fellow-worshippers from Tangerang, near the capital Jakarta.

"At home we don't have a temple, only a vihara," she added.

Centuries ago, this part of central Java was ruled by Buddhist and Hindu kingdoms which left their cultural mark on the landscape with scattered temples and statues.

But today, Buddhists, along with Christians and Hindus, are among the religious minorities in Indonesia.

Borobudur, made up of platforms that form a pyramid shape, is topped with several stupas and statues of Buddha.

Its construction was a considerable human feat, but the temple mysteriously fell into disuse and lay forgotten for centuries until it was rediscovered in the 19th century, covered in ash and vegetation. It is now a UNESCO World Heritage site.

While Borobudur and other Buddhist sites in the area are important historically, there are constant reminders that this is predominantly Muslim territory.

Many of the local women here wear the traditional Muslim head covering. As worshippers gathered at Borobudur, their chants at times competed with the call to prayer from the nearby mosque.

The nearby city of Solo is also considered the heartland for the militant Islamic group known as Jemaah Islamiah, or JI.

The group, which wants to create an Islamic caliphate in Southeast Asia, was responsible for several deadly bomb attacks in Jakarta and the resort island of Bali.

Back in the 1980s, parts of Borobudur were damaged in a bomb attack. But today perhaps the greatest threat to the monument comes from tourists, including many non-Buddhists who ignore the "no climbing" signs and scramble on top of the stupas to pose for photographs, much to the horror of Buddhist worshippers.

Still, the celebration of Vesak in the Muslim heartland of Indonesia is an important test of religious tolerance in a country that has suffered from several bouts of religious tension since the ouster in 1998 of former President Suharto.

While the autocratic Suharto used the armed forces to crush dissent in the sprawling, multicultural archipelago during his 32 years in power, the transition to a vibrant democracy in 1998 meant it was far easier for religious tensions to flare up.

Indonesia's ethnic Chinese, who tend to be Christians or Buddhists, and who are often more prosperous than the Muslims, were targeted during riots in 1998.

Religious conflicts also broke out in those parts of Indonesia with large Christian communities, such as Poso and Ambon. But while those conflicts have now been resolved, Indonesia still has a chequered record in dealing with religious freedom and protecting the rights of all its citizens.

Several churches and other places of worship have been attacked in recent years, prompting criticism from human rights groups, for example in the United States.

And in recent weeks, the government has come under intense pressure from hard-line Muslim groups to ban the Ahmadiyya, an Islamic sect that some Indonesians consider "deviant."

But Buddhists say that they have not been the victims of attacks on the grounds of religious belief.

"If we talk purely about religion, there are no limitations. In 1998, there were rules that Buddhist groups must join WALUBI to be allowed to exist, but after 1998 there are other organizations. Buddhist groups do not have to join WALUBI, they have more options," said Siti Hartati Murdaya, head of WALUBI.

"I think the freedom of religion in Indonesia is on the right track," she added.