Mangelang, Indonesia -- By 10 o’clock on Saturday morning, the Borobudur subdistrict of Magelang, Central Java, was filled with cars and buses loaded with visitors coming to commemorate the birth, enlightenment and death of Buddha. 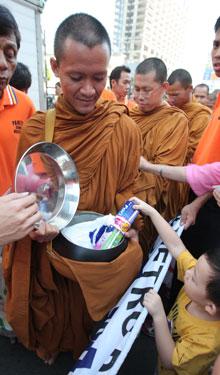 Waisak, the Buddhist holiday marking the events, is held on the arrival of May’s first full moon, and the mystical Borobudur Temple attracts celebrants from many different religions. Some believe that touching the enshrined statues of Buddha can bring good luck; followers of Javanese mysticism sometimes meditate there to obtain divine messages or inspiration.

Normally, the area named after the grand, ninth century Mahayana Buddhist candi, or ancient temple, is calm and undisturbed. This weekend, the traffic was hectic on the route connecting Borobudur and Mendut temples, especially near the Karet Monument, where police had blocked the roads to stop motorized vehicles from entering the area.

Some backyards had been turned into temporary parking lots, and Buddhist pilgrims, or those there simply to watch, had to walk, take a horse-drawn cart or rent a motorcycle taxi to get to the smaller, spaceship-like Mendut Temple, where the Waisak processions would commence.

Having walked in the heat for half an hour from where she parked her motorcycle, Maria Goreti from Yogyakarta finally arrived at Mendut at around 11 a.m. There to see the ceremony, Maria found herself surrounded by an assortment of characters and colors.

Outside Mendut’s fence, in tents or on carts, snacks, sweets, drinks, masks and even live birds were on offer. Buddhists from around Indonesia and the world pushed through the gate, brushing shoulders with tourists and reporters, to reach the temple’s yard to perform ritual meditation in front of different altars.

“I’m always interested to see and experience new things. Even though I have lived in Yogyakarta for more than 20 years, this is the first time I’ve had the chance to witness the Waisak procession in Magelang,” Maria said, a digital camera slung around her neck.

Nearby, Slamet was sitting in his tent, adjacent to the temple fence, selling masks for use in the traditional Chinese lion dance, barongsai.

“I’ve sold quite a lot in the last two days. I usually sell the masks from one Chinese temple to another, from city to city — it depends on where there will be events. Now I’m here because I knew Mendut was going to be teeming with potential buyers,” the native of Semarang, Central Java, said.

The area around Mendut was a hive of casual and commercial interactions, but Borobudur would be the focus of the spiritual and formal procedures. The great, nine-platformed temple was the destination of thousands of people as they embarked from the first temple, some on foot, others by vehicle, and passed by another Buddhist temple, called Pawon.

The journey from Mendut to Borobudur, which should take approximately an hour by foot, was already a great challenge by midday. Vehicles crawled through bystanders on both sides of the road.

Unperturbed by a sudden downpour, the people were waiting for the saffron-robed bhikhu, or monks, to pass, carrying of the holy water and the holy fire.

For now, they had to be content with the sight of the snarled up traffic and the shouts of the police officers directing traffic and pedestrians.

“More than a thousand police officers — both national and local — have been deployed to manage the security and orderliness of Waisak,” said Bambang BP, the Magelang Police chief.

“We’re assisted by the Armed Forces, Satpol PP [public order brigade], the Transportation Agency and some NGOs. So far things have been under control. It’s not as busy as last year’s celebration.”

Still, the traffic mess would continue until dawn at the crossroads near the entrance gates to Borobudur Temple, where two gigantic tents and a spectacular stage had been set up.

Buses carrying dance troupes from Cambodia, Laos, Myanmar, Thailand, Vietnam and Indonesia were obstructed every now and then on their way to the temple.

The troupes were scheduled to perform on Saturday night in front of thousands of people, including President Susilo Bambang Yudhoyono and the ambassadors of Southeast Asian countries.

During a rehearsal the previous day, Nouth Phouthavongsa, a choreographer from Laos, said that as an artist and a Buddhist, she was proud to be invited to Borobudur to share her creation for the third time. “We will be performing a dance called the ‘Way of Peace,’ which tells the story of two different families. One family is good, the other is terrible. But the bad family will find guidance in the teachings of Buddha in the end.”

Mao Keng, a choreographer from Myanmar, shared the same pride. This was his second time to take part in the celebration of Waisak at the temple.

“Even though Indonesia is a [predominantly] Muslim country, the scale of its celebration of Waisak is massive,” Mao said. “This shows the level of tolerance between the different religions here.”

Mawardi, the imam of the Ar Rochman Mosque, situated in Borobudur’s vicinity, said that even though he had never visited the temple, he could appreciate its place in the hearts of Buddhist followers.

At Waisak, many Muslims take part in the procession from Mendut from Borobudur, although they are mainly there for the festive vibe of the occasion.

“It’s not a problem for Muslims to go to the temple, as long as they adhere to the teachings of Islam,” the 75-year-old Mawardi said with a smile, before stepping out of the humble mosque, which that night witnessed pink-blue floodlights and burning lanterns dancing in the sky over Borobudur.

After all the speeches and dance performances at Borobudur, rows and rows of monks circled the temple, each holding a candle, while joyfully chanting Buddhist mantras that reverberated in the chilly air.

Guests were allowed to follow the ritual, and even though she did not know what the bhikhu were saying, Putri Fitria, a student from Yogyakarta, said she felt peace as she walked with them.

“It does not matter that I’m a Muslim,” she said. “As long as someone is not a fanatic subscriber of a certain religion, any spiritual experience should be wonderful and comforting, and that’s what I find here.”