Aceh, Indonesia -- Hundreds of Buddhist residents on Sunday joined a prayer in front of a mass cemetery for people who died in the deadly 2004 Indian Ocean tsunami that hit Aceh five years ago. 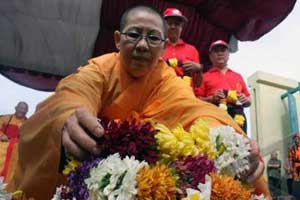 << Never forget: A Buddhist prayer leader places flowers at a mass cemetery for victims of the 2004 Indian Ocean tsunami in Ulee Lheu, Banda Aceh on Sunday. Nearly 230,000 people around the region were killed in the disaster. (Antara/Irwansyah Putra)

The followers also took part in other rituals such as releasing flowers and lanterns to the Ulee Lheu Sea.

One of the event’s organizers, Yuswar, told news portal tempointeraktif.com this commemoration was aimed at praying for the Buddhists killed during the disaster.

“The rituals will continue until Dec. 26,” Yuswar added.