Magelang, Indonesia -- Buddhist monk Thich Nhat Hanh led 500 Buddhists and monks from 15 countries in a series of meditations at the renowned Borobudur Temple complex in Magelang, Central Java, on Thursday. 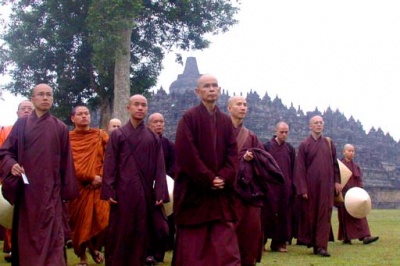 << Buddhist meditation: Buddhist monk Thich Nhat Hanh (forefront) and his followers walk to Lumbini Park at the foot of Borobudur Temple in Magelang, Central Java, on Thursday, after leading a meditation peace walk. Such meditation has reportedly been practiced in some parts of the West, North America and Asia. JP/Suherdjoko

Using slow but deliberate movements, the monk led participants to climb from the bottom to the temple’s highest stupa.

“Through breathing we know about life. When breathing we feel life. That’s the joy of living,” the 84-year-old monk told participants during the activities at the temple’s Lumbini Park.

In a simple way, he taught people that meditation could be done when doing any daily activities - from working, sitting, walking, sleeping and eating to drinking - by concentrating and becoming alert of their surrounding to reach peace.

Monks Dharmavimala and Nyana Suryanadi explained that through meditation, a person could find his or her peace to control anger and desperate feeling.

Nhat Hanh, who had planned his visit here 18 months ago, is on a 15-day trip to the country, his first ever. He has also toured Singapore, Malaysia, Thailand and Hong Kong.

In Indonesia, the Vietnamese monk is scheduled to lead a series of activities to promote harmony and share his teachings on “mindful living” to people of all backgrounds.

Nhat Hanh, who comes from the Plum Village Monastery in the south of France, is renowned for his teachings of “mindfulness” in which he encourages people to embrace the present instead of being trapped in thoughts of the past and future.

The monk’s activities include a five-day meditation retreat in Bogor, West Java, followed by the peace walk around Borobudur temple.

After that, the monk is scheduled to attend a public meeting at Mega Glodok in Kemayoran, Central Jakarta, on Oct. 9.

He said the religion flourished under the previous leadership of monk Aksin Jinarkkhita.

“These two Buddhist leaders share similar visions on the need to promote Buddhism as living and universal religion, free from sectarian restrictions, which may weaken its true spirit and teaching,” Sudhamek said.

Nhat Hanh, who became a monk at the age of 23, has published more than 100 books, including 40 in English. He became renowned for his opposition to the Vietnam war and for his work in promoting peace.

He was kicked out of Vietnam and lived briefly in the US where he completed his studies at Princeton University and became a lecturer at Cornell and Columbia Universities. He then moved to France where he established Plum Village Monastery.