MINNEAPOLIS, MN (USA) -- The U.S. raid that killed Osama bin Laden was understandable, the Dalai Lama said Saturday, yet it also saddened him because of his lifelong commitment to nonviolence. 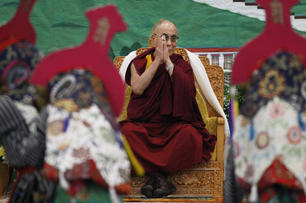 The Tibetan Buddhist leader said violence easily gets out of control and causes resentments that breed additional enemies.

“You can easily eliminate one individual, but consequences look like more, more, more complicated,” he said of the al-Qaida leader blamed for the Sept, 11, 2001, attacks, who was killed by Navy SEALs in Pakistan last week. “I’m quite sure there are some people who admire him for certain reasons.”

The Dalai Lama said he was deeply saddened by all the deaths on 9/11, yet because he’s always been against capital punishment he was also saddened by the hangings of Saddam Hussein during the Iraq War and of Nazi war criminals after World War II. He didn’t say whether he thought bin Laden’s death was justified, but he suggested there were parallels as he stressed his theme of nonviolence.

“Dialogue is the only way. When you use violence, even though your goal is justified ... unexpected sort of consequences often happen,” the 1989 Nobel Peace Prize winner said. “... So right from the beginning, I thought it was very sad thing.”

The Dalai Lama traveled to Minnesota to speak today at the University of Minnesota, where his topic is “Peace Through Inner Peace.” He also planned to attend a celebration Saturday in St. Paul with members of the state’s Tibetan community, the second largest in the United States at an estimated 2,500 to 3,000.

In preparation for his eventual death, the 75-year-old is in the process of handing over political power to a newly elected Tibetan government-in-exile, while retaining his post as spiritual leader. He laughed at the irony that while he has always told people that religious and political institutions should be separate, he’d held both roles until now.

He said he’s “happily, voluntarily, proudly” giving up political authority to a democratically elected leadership. He said the first four Dalai Lamas were strictly spiritual leaders, while the fifth Dalai Lama and all the others up though him, the 14th, held dual responsibilities. Tibetan Buddhists believe each Dalai Lama is a reincarnation of his predecessor.

The Dalai Lama also planned to have a meeting Saturday with local Chinese students and nationals. He said they would discuss Buddhism in China, where he said an estimated 300 million out of 1.3 billion people are Buddhist despite communist efforts to suppress religion.

The Dalai Lama fled his Tibetan homeland in 1959 and settled in northern India. He has long campaigned for greater autonomy for Tibetans within China, but denies Beijing’s claims that he’s trying to split Tibet from China, which occupied Tibet in 1950 and claims the region has been part of its territory for centuries.

The Dalai Lama also took questions from 11-year-old aspiring journalist Lachlan Anders-MacLeod, a sixth-grader at Oak Grove Middle School in Bloomington. He asked the Dalai Lama what he could say to the younger generation about kindness in today’s society.

Young people should make the 21st century one of dialogue and reconciliation, the Dalai Lama told the boy. He said his own generation made a lot of contributions to the world but created a lot of problems, too. Despite some “marvelous achievements,” the 20th century was one of bloodshed, he said.

“So therefore the 21st century should be, logically, no more bloodshed,” he said.