Dhramsala, India -- From the Buddhist point of view, the minds of ordinary people are weak and distorted because of the delusion and emotional afflictions they carry within themselves. As a result, they are unable to see things as they actually exist; what they see is a vision that is twisted and defined by their own emotional neuroses and preconceptions. 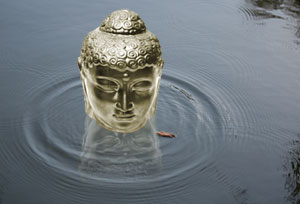 The purpose of Buddhism is to remove these distortions from the mind and facilitate valid perception. When we eradicate the delusions, we start seeing reality as it is. This benefits everyone - both in this life and in those that follow. Therefore, Buddhism is a path not simply of faith but one also of reason and knowledge.

How to study Buddhism

Tibetans are fortunate to have been born into a society where spiritual knowledge is available and appreciated. However, having been born into it, we sometimes take it for granted. The Buddha said, 'Test my words as carefully as goldsmiths assay gold and only then accept them'.

The Buddha taught people of all backgrounds and intelligence for long. Consequently, each of his teachings should be weighed and evaluated to determine whether it is literally true or only figuratively so. Many of his teachings related to specific circumstances or were given to beings of limited understanding. Accepting any doctrine without first analysing it is like building a castle on ice. The structure will lack both in strength and depth.

What does 'practise Dharma' mean? Literally translated, Dharma means 'that which holds'; it is the spiritual teaching that keeps, or leads us out of suffering. Buddhism asserts that although at the moment our mind is overpowered by delusion and distortion, there is an aspect of the mind that is, by nature, pure and unstained. By cultivating this purity and eliminating mental obscurations, we are saved from suffering and unsatisfying experiences.

The Buddha taught the potential purity of the mind as a fundamental tenet of his doctrine, and Dharmakirti, the Indian logician who appeared a millennium later, established its validity logically. When this seed of enlightenment has been sufficiently cultivated, we gain the experience of nirvana, freedom from all the shortcomings of samsara or worldly life. Dharmakirti logically validated the entire spectrum of Buddhist tenets, including the law of karma, the concept of rebirth, the possibility of liberation and omniscience and the nature of the three jewels of refuge: Buddha, Dharma and Sangha.

It will be a mistake to practise Buddhism without logically understanding the doctrine. We should know what we are doing and why, especially those of us who are monks or nuns and have dedicated our entire lives to the practice of Dharma. We should be particularly careful to practise immaculately. The Sangha is very important to the stability of the doctrine; therefore, we should do our best to emulate the Buddha himself. Those considering ordination should first think well; there is no need to become a monk if you are going to be an inferior monk. The Sangha has the responsibility of embodying the precepts. If you want to lead an ordinary life, leave monasticism to those of greater spiritual inclination and simply practise as a layperson as best you can.

All world religions are similar in that they provide methods for cultivating wholesome aspects of the mind and eliminating unwholesome ones. Buddhism is a particularly rich religion, because it developed in India when the country was at a high point, spiritually and philosophically, and also presents both a total range of spiritual ideas and a rational approach to the methods of spiritual development. This is particularly important today, when the rational mind is given such credence.

Because of this aspect of rationality, Buddhism has been able to face the modern world. Indeed, many of the findings of modern science, such as those of nuclear physics, which are considered new discoveries, have long been discussed in ancient Buddhist scriptures. Buddha's last advice to his disciples was that they should never accept anything based on faith alone but experience it also through rational investigation. The Buddhist world has always managed to keep the spirit of inquiry very much alive within its precincts. This is unlike many other religions that lay claim to the truth and never allow any type of investigation that seems to threaten their limited description of reality.

Whether or not you are a Buddhist is determined by whether or not you have taken refuge in the three jewels - Buddha, Dharma and Sangha - from the depths of your heart. Simply reciting Buddhist prayers, playing with a rosary or walking around temples does not make you a Buddhist. Even a monkey can be taught to do these things. Dharma is a matter of mind and spirit, not of external activities. Therefore, to be a Buddhist you must understand exactly what the three jewels of refuge are and how they relate to your spiritual life.

Here we are talking about the casual Buddha refuge - all the Buddhas of the past, present and future, of whom the most relevant to us is Buddha Shakyamuni - and the resultant refuge on our own potentiality for enlightenment, the Buddha that each of us will become. As for refuge in Dharma, there is the Dharma that was taught in the scriptures and that which is the spiritual realisation of what was taught. Finally, we take refuge in Sangha, and the arya Sangha - those beings who have gained meditational experience of the ultimate mode of truth. Therefore, we say that Buddha is the teacher, Dharma is the way and Sangha are helpful spiritual companions.

Of these three, the most important to us as individuals is Dharma, for ultimately only we can help ourselves - nobody else can achieve our enlightenment for us or give it to us. Enlightenment comes only to the person who practises Dharma well, who takes Dharma and applies it to the cultivation of his own mental continuum.

Therefore, of the three jewels, Dharma is the ultimate refuge. By hearing, contemplating and meditating on Dharma, our lives can become one with it and enlightenment can be an immediate possibility.