Engaging the world through Buddhism

Washington, D.C. (USA) -- Engaged Buddhism refers to Buddhists who are seeking ways to practically apply insights from their meditation practice and spiritual teachings to social, political, environmental, and economic suffering and injustice. 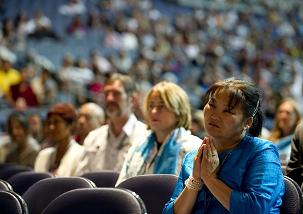 While the roots of Engaged Buddhism may be found in the teachings and actions of the Buddha himself, and other great teachers of the past, Engaged Buddhism can also be understood principally as a movement that began in the late 19th century as a response to Western colonialism in Asia. It is best known through its political movements, such as the struggles by the Tibetan, Burmese, and Vietnamese Buddhists for self-determination, democracy, and peace.

Engaged Buddhism is not simply being a Buddhist and involvement in politics and social justice. Rather, Engaged Buddhists critically and creatively apply the Buddha’s teachings to transform themselves and their societies. Thich Nhat Hanh of Vietnam, Ajan Maha Ghosanand of Cambodia, The Dalai Lama of Tibet, Aung San Suu Kyi of Burma, and Ajan Sulak Sivaraksa of Thailand are modern-day leaders who embody Engaged Buddhist principals and have guided organizations such as the Buddhist Peace Fellowship, the International Network of Engaged Buddhist, and the Zen Peacemakers.

When I first went to Tibet in the late 1990s, I was on a pilgrimage and did not intend to involve myself with politics in general, nor practice Engaged Buddhism. The roadmap for my pilgrimage was the far-ranging travels across Tibet by a 19th century mystic known as Tertön Sogyal. I meditated among hermits in remote sanctuaries and slept in caves where Tertön Sogyal had experienced spiritual visions. On foot, on horseback, and in dilapidated buses, I crossed the same snow-covered passes that he had used to travel from eastern Tibet to Lhasa. I was searching out the living masters and yogis who uphold Tertön Sogyal’s spiritual lineage and could tell me the oral history of his life and teachings.

But my pilgrimage took an unexpected turn.

The more time I spent in Tibet delving into the 19th-century teachings of Tertön Sogyal, the more often I met Tibetans who wanted to tell me their stories of frustration and suffering in what they see as Chinese occupation of their country. And the Tibetans spoke of their never-ending hope that one day the exiled Dalai Lama would return to Tibet. Traveling as a Buddhist pilgrim, I gained the trust of Tibetans. Political prisoners who had experienced abuse and torture in Chinese prisons showed me scars. Monks and nuns who had been kicked out of their monasteries gave me their expulsion notices from the local security bureau. I was taken to meet a Buddhist leader who had been scalded with boiling water and then jailed for five years for publicly praying to the Dalai Lama.

Tibetans not only told me their stories, but early into my pilgrimage they asked me to spirit such firsthand accounts of human rights abuses out of Tibet and into the hands of Western governments and advocacy groups. I became a courier of often-graphic accounts of torture and abuse. This required evading China’s vast security network of plainclothes security agents, undercover cops in monk’s robes, and sophisticated cyber police. I began photographing Chinese secret prisons where Tibetan monks and nuns are incarcerated for their Buddhist beliefs. The decade-long journey in Tertön Sogyal’s footsteps became a different kind of pilgrimage -- one that became the dual narrative of the book In the Shadow of the Buddha; Secret Journey, Sacred Histories, and Spiritual Discovery in Tibet.

While I do not claim to have benefited anyone from my human rights work, I can say that I have tried to apply what the Buddha and my teachers have taught me about acting for the benefit of others. This is how I entered the path of Engaged Buddhism. I have given voice to what I have witnessed. I know in politics, ultimately, there are no winners, for every politician will die and every government will eventually fall -- the real question is not if a political system will survive, but when will it fail, Because everything is impermanent, including politicians and their governments, we have a responsibility to affect change that will bring about the conditions right now for others to find contentment and happiness. For me this is Engaged Buddhism.

Like many others who have been profoundly affected by Tibet’s unique wisdom culture, I cannot let the world forget about Tibet. China wants governments and people around the world to forget about Tibet, to turn their backs on monks, nuns, musicians and bloggers who languish in prison for their religious beliefs and their peaceful expression of political views. It is the responsibility of those who have the freedom to travel, to write, and express our opinions, to talk to our governments -- and to not only bear witness but act to change injustice. This is why I documented China’s human rights abuses in Tibet and why I wrote In the Shadow of the Buddha. I do not expect everyone to take up the Tibet issue. That is not my reason for writing. Rather, it is my hope that wherever we find ourselves in the world, we never lose hope and faith and a sense of responsibility to those who are suffering in our family, in our community, or in other countries.

I believe progressing on our spiritual path means doing what each of us needs to do to for ourselves to bring about true and lasting contentment, beyond suffering. And accomplishing the path of social engagement means creating the conditions for others to find that same lasting satisfaction. These are the commitments I’ve learned from my venerable teachers, and ones that I continue to take with me.

-------------
Matteo Pistono, author of recently released “In the Shadow of the Buddha: Secret Journeys, Sacred Histories, and Spiritual Discovery in Tibet,”  will be contributing to On Faith during the Dalai Lama’s visit to Washington D.C., and tweeting from the Verizon center (Twitter:@matteopistono).